No wonder the Coen brothers turned down this sub-par script 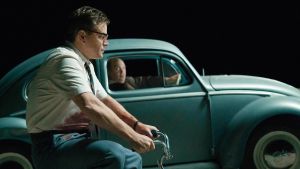 What’s goes on behind the identical front doors that abut perfect emerald lawns in George Clooney’s heightened version of 1950s suburbia? Nothing much. Everybody goes about his or her business in civilised fashion. What secrets do the men in neat hats and knitted ties harbour? Only the everyday, harmless varieties. What do we make of their love lives? Oh, they all stick to the dreariest missionary positions within the safety of solid marriages. Nobody will be spanking his half-naked sister-in-law with a table tennis bat in Suburbicon.

If you think the irony is leaden in the previous paragraph then you are advised to avoid Clooney’s latest symphony of bum notes. The picture begins with an advertisement for the titular Suburbicon that – all pizzicato strings and grinning housewives – offers us no doubt that sinister developments are to follow. The purpose could hardly be clearer if we commenced with Transylvanian peasants advising naive tourists not to venture near the dark castle on the hill.

This is not to suggest that there are no possibilities left for film-makers eager to go behind the white picket fence (only figuratively present here). In 2009, the Coen Brothers delivered one of their best films with the similarly themed A Serious Man. The story dealt with a young boy half-suspecting that his family was up to vaguely grasped forms of no good in pre-Watergate suburbia. About a decade earlier, the Coens set aside a vaguely similar script that, on this evidence, managed not an ounce of A Serious Man’s nuance. Their old pal George Clooney has plucked it from the trash, scraped off the banana skins and tacked on one of the most absurdly misjudged subplots in the medium’s history.

Those seeking cheap, knock-off Coen Brothers from the market stall (Koen Brothers, perhaps) will get along well enough with the core story. It is the Eisenhower era. Matt Damon plays a straight-up guy living an ordinary life with his son (Noah Jupe), his disabled wife (brunette Julianne Moore) and her twin sister (blond Julianne Moore). One night two men break into the house and, after summoning all inhabitants to the living room, administer enough chloroform to send all but brunette Julianne to sleep. Her they accidentally kill. She had a weaker constitution, you see. A later, puzzling development at the police station – the sort of clever hook the Coens do so well – sets us to wondering if all is as it seemed with the crime.

That story progresses in the vein of a typical film from Clooney’s directorial portfolio. That is to say all constituent elements function efficiently: Damon and Moore cruise in third gear; Alexandre Desplat’s score jangles; Robert Elswit’s camera relishes the darker corners. But nothing suggests that Clooney should give up his day job. There’s a good, tense scene with Oscar Isaac as an insurance investigator that kicks up hints of Arsenic and Old Lace. If you came across the thing on telly then you might not turn it off.

The real problem is the baffling decision to graft on a satellite plot concerning such suburbs’ resistance to racial integration. Based on a real-life case from contemporaneous Pennsylvania, this narrative shard moves an African-American family into the house next to our anti-heroes. The children have a few chats. The mothers exchange pleasantries. But, for the most part, the black family serve only to provide literal and figurative background noise.

You know what they say about the road to hell. Here the good intentions are so compromised they scarcely merit the description.