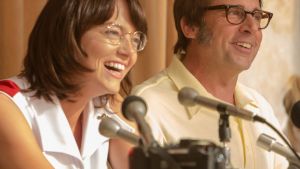 Film Title: Battle of the Sexes

There are dark themes of misogyny, gender inequality, homophobia, and discrimination underpinning the new film from the directors of Little Miss Sunshine. But one only occasionally realises as much while watching this lively, crowd-pleasing comedy.

In 1973, retired tennis champ Bobby Riggs (Steve Carrell) was a self-proclaimed sexist pig promising to put the “show” back into “chauvinist”.

King understandably declines his proposed exhibition match. She is, after all, rather preoccupied with the Virginia Slims Circuit, a tour formed by female professionals in protest against the outrageous gender gap in prize monies awarded by United States Lawn Tennis Association. She is, additionally – much to the disgust of her Australia rival Margaret Court (a seething Jessica McNamee) – coming to terms with her sexuality and her feelings for Marilyn (Andrea Riseborough, the tour’s hairdresser).

But when Court accepts Riggs’s winner-takes-all challenge and is properly trounced, it falls to Billie Jean to restore honour to womankind.

There’s plenty to admire about this comic confection. Carrell hams with abandon as a chancer constantly surveying the horizon for his next mark or hare-brained scheme, the kind of man who pulls out a deck of cards at his Gambler’s Anonymous meeting, with a battle cry: “Who’s in?” The generally fragile-looking Stone morphs into a sportier, sloping entity only to visibly melt in her lover’s presence. Tennis pros and body doubles Kaitlyn Christian and Vince Spadea fill in the blanks.

At 121 minutes, Battle of the Sexes occasionally drags, but it’s the Hairy Legged Feminist-Male Chauvinist Pig showdown that we needed right now.