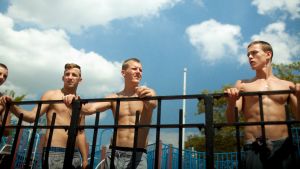 Keep your eye on Harris Dickinson. The young Londoner swells with potential in this uneasy drama about growing up gay in Coney Island. It’s not a showy turn. He doesn’t wrestle the film to the ground. Dickinson works the camera subtly to convey internal conflicts that his character may never fully resolve. He will be with us for a while.

Eliza Hittman’s Beach Rats closes off a strong year for films with gay themes. The picture is more at home to older registers of repression and self-deception than were films such as God’s Own Country and Call Me by Your Name.

Dickinson plays Frankie, an attractive young man living tensely with his sister and mother in that famously moth-eaten seaside corner of Brooklyn. His dad is dying of cancer. He has finished school and is out of work. The film begins with him chatting on a gay dating site. Later he hooks up with a local girl and they work through an inevitably unsatisfactory affair.

“I don’t really know what I like,” he says to an online correspondent. “I don’t really think of myself as gay,” he remarks to a male sexual partner. “But you have sex with men?” the other replies. The picture works hard at understanding why Frankie can’t face truths that seem undeniable to us.

Beach Rats does not race to its disturbing conclusion. Random chatter, chance encounters and laddish romps lead slowly to something a little like a betrayal. But the director’s passionate interest in her protagonist and his surroundings keep us interested.

The picture is alive to young bodies – healthy flesh illuminated by summer fireworks – but never slips into the lascivious greed of a Larry Clark image. Beach Rats does feel a little half-formed, but it swells with such passion that one longs to follow all involved on their subsequent journeys.