The Star review: It’s hard to keep the faith with this nativity story 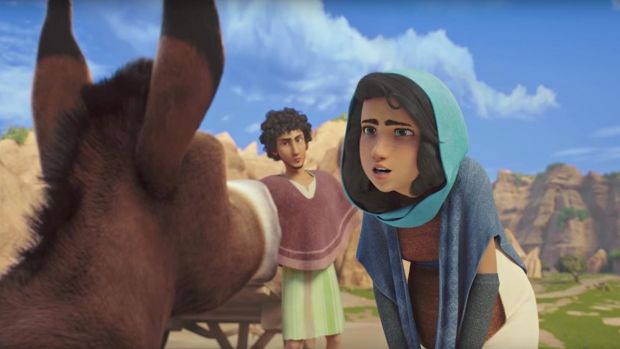 The Star propagates its myths through some of the cheesiest God pop you have ever heard. “Mary, did you know that your baby boy will grow up to walk on water?” one warbles.

The talking donkey and the dancing African-American camels are odd enough, but nothing here so strains credulity as the ancient middle-eastern girl – coiffed and dressed very much like a contemporary Orange County citizen – who accepts the unlikely prophecy of a visiting spirit without so much as a demur. Apparently this “Mary” is going to give birth to the Messiah. Few children’s films have featured quite so peculiar a scene as that in which her husband, Joseph, notices she is pregnant. “I know how this sounds,” she says. Well, I certainly know how it sounds. But I’m not sure the film-makers know how it sounds.

It is at this moment that casual viewers will conclude they are watching a “faith-based” animation. A more cynical, less committed operation would have persuaded those sequences offstage and focused on naked exploitation of the nativity story. The good (very, very good) people at Franklin Media – producers of such unwatchable guff as Miracles from Heaven and Heaven is for Real – know that their core audience will have no time for such scoffing. The film believes its myths and propagates them through some of the cheesiest God pop you could ever dread to hear. “Mary, did you know that your baby boy will grow up to walk on water?” one warbles. The Lord, when he appears to shepherds, has the bland, soothing voice you expect to emerge from a sat nav speaker.

Larks are available for less-demanding children of people other than Richard Dawkins. Told through the eyes of a donkey, the picture has an innocence that contrasts nicely with the exhausting snark of so much contemporary animation. The pygmy jerboa is cute. Christopher Plummer (not drafted in to replace any alleged sex pests, so far as we’re aware) does good voice work as Herod.

Is that enough faint praise to keep me out of Hell?