The man who ruined Christmas

Four years after his much-lamented death in a Downton Abbey Christmas special, actor Dan Stevens is restoring some festive cheer with his portrayal of Charles Dickens, the writer credited with ‘inventing’ Christmas 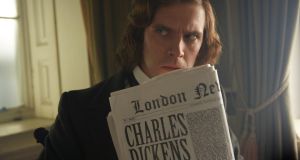 Dan Stevens as Charles Dickens in ‘The Man Who Invented Christmas’: “At the time when Dickens was writing, Christmas was a minor religious holiday. It wasn’t at all like it is today. He introduced a couple of things.”

Four years have passed since Matthew Crawley – the character that made 34-year-old Dan Stevens a household name – was killed off in a Downton Abbey Christmas special, thereby sending the Twitterverse into a collective meltdown. (Sample tweet: “WOW DOWNTON ABBEY SO MAD SO UPSET WHAT IS LIFE ANYMORE. WHAT’S THE PURPOSE ANYMORE”)

For several years, Stevens found himself apologising for ruining Christmas. So it’s only right and proper that he’ll soon be restoring festive cheer by playing Charles Dickens in The Man Who Invented Christmas. This new film follows Dickens as he encounters the real-life inspirations behind Ebenezer Scrooge (essayed by Christopher Plummer), Tiny Tim and the various ghosts that haunt A Christmas Carol.

“I’m not a huge fan of the kind of biopics that are cradle-to-grave stories,” says Stevens, an appropriately bookish chap who read English at Cambridge and who was on the judging panel for the 2012 Man Booker Prize. “I like that this is a portrait of Dickens at a very particular moment in his life. He had four kids and another on the way. He had mounting debts. He was working too hard. And he drove himself a bit mad really, trying to write the ultimate literary hit.”

“Not a lot of people know anything about the man,” says the actor. “There have been very few depictions of him on screen. I love that we get to peek into his consciousness in this magical way. He was playful and childish and silly. With this hugely influential imagination. But there was quite a dark side to him. He was incredibly ambitious. And he had that insight into the ills of the society. He could really see what was going on and that weighed heavily. A Christmas Carol combines all of these aspects of his personality.”

As the title suggests, The Man Who Invented Christmas depicts Dickens as the progenitor of many contemporary Christmas traditions. This is not a new idea. As long ago as 1903, FG Kitton, one the earliest Dickens scholars, published an article on this very subject, entitled The Man Who ‘Invented’ Christmas.

“At the time when Dickens was writing, Christmas was a minor religious holiday,” says Stevens. “It wasn’t at all like it is today. He introduced a couple of things. One of the most significant things about A Christmas Carol, from a literary perspective, is that the villain – the archetypal bad guy – changes rapidly overnight and becomes a good person. That’s a radical idea. Traditionally, you have the hero, the fool, the villain and while they might go on a journey, they don’t change designation like that. Also, Dickens’s idea of charity and giving at Christmas, as a way of countering capitalism and materialism, was a very valuable idea.”

Dan Jonathan Stevens was born in Croydon and was adopted at birth by his parents, two teachers, now retired. He was something of a rebellious youth. Many school reports suggested he should “stop distracting others”. Still, he managed to win a scholarship to Tonbridge School in Kent, aged 13. There, under the tutelage of the novelist Jonathan Smith, he developed a keen interest in drama, spending his summers with the National Youth Theatre in London. Once on stage, he “never looked back”. The job, he notes, has lost none of its appeal over the intervening years.

“The nerves are perhaps less of a thing than they were back then,” he says. “But they’re still there, depending on the day or the scene. There’s still that drive of adrenalin. And the magic of being able to create worlds, especially when those worlds are fantastical realms. I’m very happy to be there.”

When he isn’t in fantastical realms, he can be found in Brooklyn with his wife, Susie Harriet, a South African jazz singer, and their three children, Willow (8), Aubrey, (5), and Eden (1).

“They all have different accents from each other,” laughs their dad. “Their voices are a record of where we’ve been living. So the eldest sounds like Julie Andrews. The youngest, we’ve just decided, has a broad American accent. And the second sounds like a Brooklyn longshore man.”

Christmas, understandably, is a very big deal in the Stevens house: “Not so much the shopping. But the stupid jumpers and the stockings. I think we do Christmas well in our house. Watching classic movies over and over.”

Including, of course, A Christmas Carol. But which version? “I’m a big fan of The Muppets with Michael Caine,” says Stevens. “That’s the fixture in our house.”

Your annual guide to the best toys, fashion, travel, food and drink for the season

Where did it all go wrong for Johnny Depp?
10