A riveting journey into the wild with Jane Goodall

Jane review: The scientist's work with chimpanzees in Tanzania makes for ravishing viewing 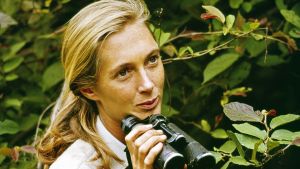 Jane Goodall in Gombe National Park, 1965: her findings on the social and family interactions of wild chimpanzees would challenge the scientific orthodoxy of her time

When conservationist and primatologist Dr Jane Goodall ventured into Tanzania’s Gombe Stream National Park in 1960, she wasn’t Dr Jane Goodall. Indeed, the 26-year-old had no scientific credentials whatsoever when the archeologist Louis Leakey, thinking that the study of chimpanzees might have anthropological implications, dispatched Goodall to Africa. Believing she was precisely where she was supposed to be, and in the absence of any prior research in the field, she did not even think to be afraid.

What Goodall lacked in formal qualifications she made up for with her passion for knowledge and animals, mad tree-climbing skills, and patience. This last attribute would prove useful for the many months she spent tracking down the chimps only for them to hightail it in the opposite direction.

“When I arrived in Gombi, I had no idea what I was going to do except that I was going to try to get the chimpanzees used to me so that I could really learn about them,” recalls Goodall. Finally, and fortunately, these “fellow beings” do become accustomed to their British visitor. They get closer and closer. They rob bananas from her tent. And then blankets. And cardboard boxes. She gives them names: the distinguished David Greybeard, the irascible Mr McGregor, raggedy Flo and her infant daughter Fifi. Goodall realises that her subjects use tools and that Flo is happy to mate with many suitors.

Goodall’s findings on the social and family interactions of wild chimpanzees would challenge the scientific orthodoxy of her time: “At that time in the early ’60s, it was held, at least by many scientists, that only humans had minds,” she says. “Fortunately I had not been to university.”

“He was a perfectionist, which drove me mad,” says Goodall of the National Geographic photographer Hugo van Lawick, the man who would become her husband. That is apparent in this documentary. Brett Morgen, the brilliant curator behind Kurt Cobain: Montage of Heck, enjoys the benefits of contemporary interviews with the film’s heroine and 100 hours of unseen footage from the 1960s shot in Tanzania’s Gombe National Park by van Lawick. The footage, believed lost until 2013, has been stored in the National Geographic archives for more than 50 years.

If you’ve been a white-knuckle wreck, not really living, but merely surviving between episodes of Blue Planet II, then this ravishingly beautiful nature documentary is certain to please. Goodall makes for fine company and every single tableau is breathtaking.

How do you know you actually exist?
10