‘Slap her on the caboose’: the advice an 11-year-old boy is given on how to treat girls 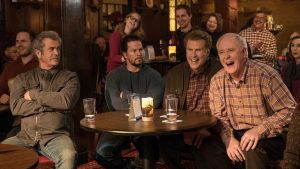 The funniest moment in this horrible sequel to an already horrible original occurs when the core family attends a Christmas action flick called Missile Tow. (The pun works only in North America. ) It’s got “cute little kids in it,” one parent remarks. So it can’t be that dirty.

Staff at the Irish Film Classification Office, who received more complaints about Daddy’s Home than any film that year, will allow themselves a wry smile at this apparent hint of meta-comedy. Like that first episode, Daddy’s Home 2 is a family film only in the sense that it concerns a family. (It is, in that sense, like the Texas Chain Saw Massacre). The opening bro-com was really about the tension between huggy stepdad Will Ferrell and Trumpian thug-dad Mark Wahlberg as they attempted to win over pliable children.

There is more mildly transgressive language in the sequel, but what really edges us into inappropriate territory is the presence of Mel Gibson. To be fair, the film-makers have come up with a decent idea to disrupt the harmony. Brad (Ferrell) and Dusty (Wahlberg), now pals, fall out when their own fathers come to stay. Don (John Lithgow) and Kurt (Gibson) take the boys’ key comic traits to lunatic levels. Don is even cuddlier than Brad. Kurt’s roasting masculinity drips hot fat on Dusty’s comparatively weedy fingers.

Greyer of skin and more creepily wall-eyed than a resting mummy, Gibson now spreads too sinister an aura for light comedy. What Kurt does say is bad enough. Asked for advice on how to treat girls, he advises his 11-year-old grandson to apply the “old spaghetti suckers” and “slap her on the caboose”. Yes, you are actually reading those words.

More worrying still is what it doesn’t do. The endless raised eyes at the close relationship between Brad and Dusty telegraphs a simmering homophobia that the film-makers don’t dare make explicit. Maybe that’s just as well. Anyway, don’t go and see it.

Sex Education on Netflix: More antiseptic and untitillating sex scenes. How off-putting
6 Welcome to the child sex capital of Europe
7

The movie quiz: What film recently took home the most Golden Globes?
9