The Lost Boys 30 years on: the vampire film to rule them all

The teen horror cult classic had it all: the two Coreys, sex appeal and great one-liners

Trailer for the 1987 vampire movie, The Lost Boys. 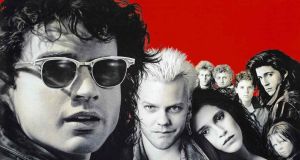 The Lost Boys: the birth of the teen horror film

To make someone feel every year of their age, just tell them how old their favourite childhood film is. This year, The Lost Boys celebrates its 30th anniversary, promoting an existential crisis in many a xennial (that’s the group in between generation x and millennials) but reminding us that the film’s status as a cult classic has clung on like a sleeping vampire in its cave.

While the fashion may have changed, and our admiration for oiled-up sax players has declined, the sharp story of two brothers who find themselves embroiled with a vampire gang has stayed with us.

Remember Jason Patric’s glacial blue eyes caught in headlights; the first time Kiefer Sutherland and his crew reveal themselves as creatures of the night; and Corey Haim’s zingy lines (“My own brother – a goddamn s**t-sucking vampire! You wait till mom finds out.”)

It was a ripe time for teenage movies, thanks to the success of John Hughes’s Sixteen Candles and The Breakfast Club, while ET and The Goonies catered for the preteen crowd. Richard Donner, director of The Goonies, was originally in the director’s seat for the first family-friendly iteration of The Lost Boys, dealing with a script that answered the question: what if Peter Pan and the Lost Boys didn’t grow up because they were vampires?

“In our screenplay the main characters were John and Michael and the mother was Wendy,” said James Jeremias, who cowrote the JM Barrie-referencing script with Janice Fischer. “They were 12 and eight, and we purposefully picked them because we wanted it before sex rears its ugly little head.”

After delays, Richard Donner vacated the director’s chair to move to Lethal Weapon (while still serving as executive producer). Instead, Joel Schumacher (St Elmo’s Fire) stepped in, Corey Haim stayed and the script changed so the brothers and the vampires were older.

“It was really Goonies Go Vampire,” said Schumacher, reflecting on his arrival into the project. “I remember thinking, well I can make it teenagers. The Frog brothers could be little Rambos. And why can’t Star be a sexy girl?”

Dodgy female characterisations aside, the hormonal frisson worked a treat. It meant that the Lost Boys were defined by their cool status as a rebel biker gang. It also allowed an obligatory sex scene between Michael and half-vampire Star, and more importantly it paved the way for the universal dilemma that helps root the story to us normal folk. Which is: if you moved to a new town and your new friends jumped off a bridge, would you?

The move also meant it became a teen horror movie: not only the first time cinemagoers saw such cross-genre, but also the first time vampires had been portrayed as young, sexy and cool, rather than blood-sucking butler-types. Vampire films that followed, from Buffy the Vampire Slayer to Twilight to Taika Waititi’s What We Do in the Shadows (which directly references the noodles/worms scene) have Jeremias, Fischer and Schumacher to thank.

Initially, the coastal town of Santa Cruz – a perfect location for its eerie funfairs and day-versus-night atmosphere – refused filming permits as the town didn’t want to be portrayed as “the murder capital of the world” (in fact, it was just the “murder capital of the US”, thanks to the activities of two real-life serial killers in the 1970s, Edmund Kemper and Herbert Mullin). But cunningly, the fictional town of Santa Carla worked, and filming took place in just three weeks, over the summer of 1986 (during which a person died outside the crew’s hotel).

The nature of the film meant most of the cast were adolescent. There was a younger set of Corey Feldman and Jamison Newlander, and the older vampires, Kiefer Sutherland, Jason Patric, Jami Gertz, Alex Winter, Brooke McCarter and Billy Wirth, with Corey Haim bridging the two because of his age and overarching role in the movie.

Schumacher gave close direction: Feldman and Newlander, playing the roles of the vampire hunters Edgar and Alan (named after the macabre poet Edgar Allan Poe), were told to brush up on Stallone and Schwarzenegger, and play their roles straight. Jason Patric channelled his internal conflict as if he were addicted to drugs.

“There are two worlds that Michael is being pulled between: the normal world of family and daytime, and then the dark night-time world of vampires,” recalled Alex Winter. “Not only is that the world I inhabited story-wise, it’s the world I inhabited shooting-wise. We started out on location in Santa Cruz and we were there for a long time doing all the scenes where me, Kiefer, Brooke and Billy are riding motorcycles and hanging out in the cave. We got up to shoot at night and went to bed at dawn. It was a wild summer and a lot of fun.”

Speaking later, director of photography Brenton Spencer said he was not aware of drugs being present during filming, though “alcohol was needed at times, to fortify”. But it’s believed that The Lost Boys is when 14-year-old Haim first tried cannabis and the first time 15-year-old Feldman tried cocaine, from his mother’s supply.

“What I didn’t realise is that when cocaine wears off, it wears off hard. And it wore off the moment I stepped foot on the set,” wrote Feldman in his autobiography, Coreyography. “I was supposed to be delivering my big speech about being a fighter for ‘truth, justice and the American way’, but I could not have been more ill-prepared. I could barely keep my eyes open.”

An even darker side of the production exists. He then alleges that his on-location guardian, children’s talent manager Martin Weiss, sexually assaulted Haim, which was not the first time Haim said he suffered abuse. Much later, in 2012, Weiss was convicted of two counts of oral copulation with a child under 14.

The Lost Boys – which only lost its box office top spot after the release of The Living Daylights – was the first of many projects in the 1980s for the “Two Coreys”. They bonded over their difficult childhoods and, soon after, their drug use. They both became teenage heart-throbs, receiving “bags of fan mail, delivered to me twice a week”, says Feldman.

The travesty is that The Lost Boys seemed to be the start of their promising careers, but suffering alleged sexual abuse and falling foul of drug addiction, that potential was never fully realised. Instead, Haim died aged 38 in 2010. Feldman is now sober, and in the wake of the Weinstein revelations, he says his lifelong aim to expose an alleged paedophilia ring in Hollywood appears closer than ever.

Given the expectation surrounding The Lost Boys, little came to pass on other fronts too. Two straight-to-video sequels were released, and the less said about them, the better. Some successes were found: Kiefer Sutherland continued work with Joel Schumacher in Flatliners, Time to Kill and Phone Booth, before his signature role as Jack Bauer in 24. Alex Winter joined Keanu Reeves as a lead in Bill & Ted’s Excellent Adventure, and later, Bogus Journey. Jami Gertz, after turning down the role of Rachel in Friends, took parts in Ally McBeal and sci-fi series The Neighbors.

Still, as finest moments go, it doesn’t get much better than the story of Sam, Mike, and “all the damn vampires”.