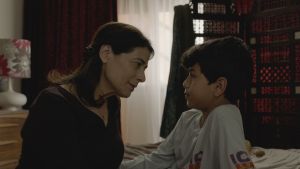 Frantic matriarch Oum Yazan (the unrivalled Hiam Abbass) is trying desperately to maintain some semblance of normal family life. Her Damascus apartment is crowded out by her extended family and neighbours, including her daughter’s boyfriend, the young couple from the bombed-out flat upstairs – Halima (Diamand Abou Abboud), and Selim (Moustapha Al Kar) – and their newborn baby. The toothbrush glass in the bathroom is standing room only. With water at a premium, hair-washing is a luxury.

Outside, war rages. The rest of the apartment block has been abandoned. The family sit together around a large table at mealtimes and attempt conversation over the munitions.

Oum Yazan swears the traumatised domestic to secrecy, at least until night falls

Halima and Selim are planning to escape the city with their baby, when Selim is hit by a sniper, an act witnessed by the maid, Delhani (Juliette Navis).

Oum Yazan swears the traumatised domestic to secrecy, at least until night falls, when they might be able to retrieve the body without attracting the interest of gunmen.

This omission prefigures a terrifying later incident – the ethical centrepiece of the film – in which two men rape one of the apartment’s occupants. The others are left with a stark choice: intervene and be discovered, or sit tight, listening to the horror through the paper-thin wall.

Writer-director Philippe Van Leeuw crafts a fascinating moral quandary from one besieged setting as happens over one fateful day. Van Leeuw immaculately conveys the spatial dimensions of the setting. That’s no mean feat when one considers how many Aristotelian experiments – we’re looking at you, Free Fire – can’t quite make that hurdle.

Almost inevitably, and working against the careful and inventive camera-work, Insyriated feels a little contrived and too much like a stage play. The film’s refusal to engage with Syrian politics may make for universalities but given the live central conflict, the neutrality makes for a strange, centrist concoction. You almost yearn for a dollop of black propaganda to add some interesting flavours.

The central conceit, too, fizzles into practicalities instead of igniting into full-blown dramatics. The script’s insistence on humanity and common experience  is commendable but, ultimately, this war-torn drama fails to bring out the big guns.

Dan Aykroyd and John Landis: How we made The Blues Brothers
10