Dennis Skinner: Nature of the Beast - holding the trough-scoffers to account

Daniel Draper’s feature-length documentary on the ‘Beast of Bolsover’ focuses on the man, but misses out on current political concerns 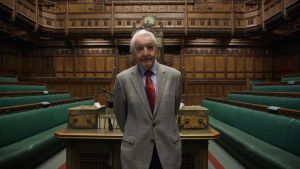 Film Title: Dennis Skinner: The Nature of the Beast

Towards the close of this very agreeable, nuts-and-bolts documentary, Dennis Skinner – the UK Labour MP who has done for grey tweed sports jackets what Churchill did for cigars – shrugs his shoulders and admits that, like every other MP, he cannot claim to perfection. No opponent who has felt the sharp end of his tongue would disagree.

But the Beast of Bolsover can boast a purity of purpose unlike any other contemporary. He refuses preferment. He does not go on overseas beanos. He will not enter the Westminster bars for fear of breathing air exhaled by right-wing journalists. Since 1970, when he was elected for the Derbyshire constituency of Bolsover, he has focused on representing the voters, furthering socialism and holding the trough-scoffers to account.

There is no better example of his method than the story, told here with great glee, of how he frustrated Enoch Powell’s efforts to outlaw stem-cell research. Skinner buried himself in the reference books and, happening upon a loophole involving the calling of by-elections, managed to engineer an epic filibuster. Powell, a purist for the sentimental right, approached Skinner and remarked: “I reckoned without you.”

Daniel Draper made his feature debut for just £30,000 and, thus, we should not be surprised that it focuses so closely on Skinner and his immediate circle. There are no uneasy encomiums from Neil Kinnock or (heaven forbid) Tony Blair. No Tories are invited to play the good sport and admit to his integrity. Skinner would undoubtedly prefer it that way, but we do miss perspectives from outside the one-man tent.

Frustratingly, the interviews also stop just before Jeremy Corbyn’s ascension. Skinner made it clear that he would accept no job from Corbyn, but the film misses a sense of how it feels to be at one with the leadership for the first time in nearly 50 years. We also long to hear his feelings, as one of the many leftists who favoured exiting the EU, about being on the winning side of that argument.

No matter. There is still plenty to interest Skinner fans. Who knew that he was an obsessive Woody Allen addict? He is particularly fond of Blue Jasmine. Give him a cameo, Woody.