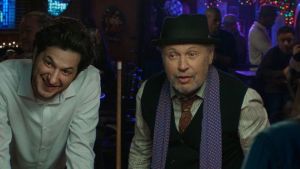 Film Title: Standing Up, Falling Down

Scott Rollins (Parks and Recreation’s Ben Schwartz) has returned to his Long Island home after an unsuccessful few years on the LA comedy circuit. After moving back in with his parents, his father (Kevin Dunn), who had hoped Scott would take over the family business, is still a bit wounded, his mom (Debra Monk) keeps on walking in on Scott in the bathroom, and his acid-tongued kid sister Megan (Gummer) has such fun at his expense, you wonder why she didn’t pursue stand-up.

Somewhat understandably, Scott starts heading to a local pub for solace. There he encounters the Falstaffian Marty (Billy Crystal), a stoner, dermatologist, and alcoholic whose antics frequently test the patience of the long-suffering barman. Together they strike up an unlikely friendship, bonded by booze and grieving.

Marty is estranged from his adult son for reasons that are gradually revealed. Scott, meanwhile, left his fiancée Becky (Eloise Mumford) behind in pursuit of a career in stand up. She has subsequently married someone else but that may not be enough to dampen Scott’s renewed interest.

Peter Hoare’s funny, poignant screenplay finds appealing parallels in the two men’s journeys. Crystal and Schwartz are a terrific double act: Schwartz’s stand-up routine could have been written and performed by a younger Crystal and the older actor brings surprising textures to a role that could have become, well, a Billy Crystal character.

They head up a lovely cast. Even smaller supporting players  – such as David Castaneda’s local security guard – make their mark. Dramedy is often a lopsided and tricky subgenre. This one doesn’t wobble.

The gentle tone doesn’t exactly evolve into August: Osage County, but Standing Up, Falling Down has enough authenticity to agreeably sally along until the final credits.