The actor and her husband, Tom Hanks, tested positive for Covid-19 in Australia 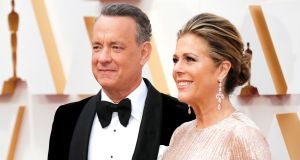 Rita Wilson with her husband Tom Hanks, who have both recovered after testing positive for Covid-19 in Australia. Photograph: David Swanson/EPA

The actor Rita Wilson has spoken about her experience with coronavirus and warned of the “extreme” side effects she suffered from medicine used to treat the illness.

Wilson and her husband Tom Hanks were the first high-profile actors to publicly state they had tested positive for Covid-19, announcing the news via an Instagram post on March 12th.

The couple were in Australia, where Hanks was working on an Elvis Presley biopic. They have both since made a full recovery.

In her first interview since being diagnosed, Wilson, 63, spoke on US television show, The Talk with Gayle King, and detailed her symptoms.

“I felt extremely achy, uncomfortable, didn’t want to be touched, and then the fever started,” Wilson said, adding she suffered from “chills like I never had before.”

Wilson, an actor and singer, said her fever reached its highest temperature about nine days following the positive test results, saying it “got close to” 39 Celsius.

She also said she had been given the drug chloroquine, which is usually used to prevent and treat malaria and is being studied as a possible Covid-19 treatment.

The ability of the drugs chloroquine and hydroxychloroquine to treat Covid-19 is still disputed by experts, despite being touted by the US president, Donald Trump, as a “game-changer”.

Wilson is not sure what impact the drug had on her. She said: “I can only tell you that I don’t know if the drug worked or if it was just time for my fever to break, but my fever did break.”

Wilson also warned the drug had “extreme side effects”. She felt “completely nauseous” and could not walk. “My muscles felt very weak,” she said.

“I think people have to be very considerate about that drug,” she added. “We don’t really know if it’s helpful in this case.”

Trump proclaimed the effectiveness of hydroxychloroquine in March, but the US’s top infectious diseases adviser, Dr Anthony Fauci, has warned that there is not enough medical evidence to prove that it is useful.

A man in Arizona died in March after taking chloroquine phosphate – a chemical used to clean fish tanks – after the US president’s advice. “Trump kept saying it was basically pretty much a cure,” his wife told television network NBC.

Wilson said Hanks, also 63, had less severe symptoms than her.

The couple are now at home in Los Angeles. – PA, Guardian