It’s hard, in 100 minutes, to convey the slow terror of a virus that kills in low percentages 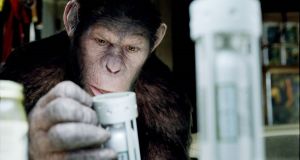 Rupert Wyatt’s Rise of the Planet of the Apes

A few weeks ago (or was it decades?), when the current crisis slipped up eight jarring gears, articles such as this began telling readers that everyone was now watching Steven Soderbergh’s Contagion.

You read this sort of thing a lot. It sounds like it might be true. It allows us to put a picture of, in this case, worried Kate Winslet at the top of the page. But were people really watching Contagion?

They were and they still are. For the opening few acts of the Covid-19 shutdown, Contagion really was top of the rental charts at Apple and Google. It hasn’t gone away. At time of writing, the 2011 film sits at number five on Apple, just behind escapism such as Frozen II and Knives Out.

This is a stranger phenomenon than the headlines suggest. Why would sensible people, in the midst of a terrible pandemic, turn towards a film concerning an even worse one? Knives Out takes you back to the cosy crime of Agatha Christie. Frozen II wraps you up in the warm glow of mythical sisterhood. Contagion has Gwyneth Paltrow dying horribly hours after developing symptoms.

One explanation is that punters were seeking advice on how to protect themselves. In this area, Soderberg and his regular screenwriter Scott Z Burns seem to have been on the money. The film prepared us for a concern about primary and secondary physical contact – notably hand to shared surface – and alerted many outside the epidemiology community to the dangers of touching your face.

There is also prescient material here about how anti-government conspiracy theorists might take advantage of such an outbreak to further their own demented ends. I will leave it to others to draw domestic comparisons with Jude Law’s paranoiac opportunist.

Contagion, like virtually all other films on the subject, diverges from our present crisis by dealing with a considerably more lethal disease. The condition in the movie has a mortality rate of around 20 percent. The viral condition in Outbreak, a less rigorous 1995 movie by Wolfgang Peterson, kills close to 100 percent of its victims in no time at all.

It is often forgotten that the recent, excellent Planet of the Apes reboot is a killer-virus franchise. Rupert Wyatt’s Rise of the Planet of the Apes, another 2011 flick, ends with an airline pilot beginning the worldwide spread of a condition called ALZ-113. The subsequent devastation, detailed in two more films, leads to the collapse of human society and the rise of newly intelligent apes.

We have recently seen videos – their provenance unconfirmed by me – of goats roaming deserted Llandudno and boars wandering uncrowded Bergamo, but it seems unlikely the gorillas will break free from Phoenix Park and march on Government Buildings. (“Ha, ha! They’d do a better job than that lot,” you say? You’re hilarious. Have a doughnut.)

That’s just how movies work. It is harder, in just 100 minutes, to sell the seriousness of a virus that, like Covid-19, kills in low single-digit percentages. Mainstream cinema finds it easier to deal with the worst imaginable calamity than a disaster that, though unprecedented in living memory, has little chance of sending us back to the Stone Age.

Cinema has prepared us over and over again for shots of deserted capitals. Cillian Murphy wandered about an uninhabited London in 28 Days Later. Charlton Heston manoeuvred a similarly deserted Los Angeles in The Omega Man. Will Smith had comparable experiences in New York during I Am Legend. (Those last two films are versions of the great Richard Matheson novel that gave its name to the Smith project.)

Anyone familiar with the images will find them clattering about the brain as they manoeuvre their own echoing city. But those films spoke of a near-irreversible decline into anarchy. A variation on the zombie sprints the world in 28 Days Later. Yet another apocalyptic virus – this time the mortality rate is 90 percent - has ravaged the planet in I Am Legend.

There is no sense of a society poised, as so many are now, to start up again and tackle the challenges of a recovering world.

These Hollywood entertainments go beyond even the Black Death. The fear and despair that stalk Ingmar Bergman’s The Seventh Seal do not entirely annihilate medieval civilisation. The travelling players do their business. The pubs are open. Returning squaddies still enjoy a game of chess.

Yet, in a few ways, reality has proved more troubling than the imaginings of the dream (nightmare?) factory. Soderbergh and Burns kept the politicians at arms’ length in Contagion. He imagined a panicked, but still sane, world in which experienced health officials dictated strategic planning. It would be exaggerating the case to suggest the Jude Law character - a rabble-rousing populist - is now president of the United States, but we’re closer than seemed feasible in the long-ago that was 2011.

The moral is that we shouldn’t seek too many practical lessons about unprecedented crises from popular entertainment. Pumped-up steroidal sensation invariably overpowers the taut strains of well-researched reality. There are certainly lessons to be drawn from treatments of the 1918 Spanish Flu such as that in Kate Atkinson’s popular novel Life After Life. Contagion really does deal responsibly with preventative medicine. But we are unwise to be overly terrified (or reassured, for that matter) by any cultural artefact that measures success by millions taken at the box office.