The Iron Mask: A bonkers movie with a bonkers lineage 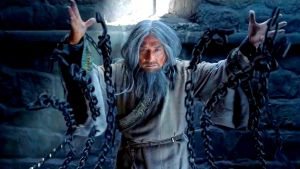 Jackie Chan in The Iron Mask

The Iron Mask – aka The Mystery of the Dragon Seal aka Viy 2: Journey to China – is a completely bonkers movie with a completely bonkers lineage. It’s predecessor, Viy (2014), had, to say the least, a very tenuous relationship with Nikolai Gogol’s source story that inspired it, with Gogol’s folkloric-friendly witch making way for Jason Flemyng.

The Lock, Stock and Two Smoking Barrels actor played Jonathan Green, an 18th-century cartographer whose map-making brings him to Transylvania, where he encounters mythical creatures.

Watched alongside the surreal 1967 Mosfilm adaptation of the same material, one would struggle to find many similarities. Coincidentally, back-to-back viewings of the 2014 film and its supposed sequel reveal surprisingly little common ground.

Stepchenko’s Viy was, nonetheless, the highest-grossing Russian film of that year, hence the starry cast anchored to this sequel. (It might have been even starrier: Jason Statham and Steven Seagal were previously attached.)

That wattage hasn’t paid off. The Iron Mask spluttered past a $14 million box office take against a budget of $49.1 million. But the film does at least answer a question that has been asked many times in recent weeks: what does Arnold Schwarzenegger do all day when he’s not cocooning with Whiskey and Lulu?

So here goes nothing. Jackie Chan is The Master, protector of the Dragon Seal, which, according to a rambling introductory narration, has something to do with good and bad wizards, magic tea and a dragon. Unhappily, Chan is locked up in the Tower of London, a fortress presided over by Arnold’s Schwarzenegger’s not wholly convincing English nobleman, James Hook. The Master’s cellmate is the Man in the Iron Mask. Under that mask is Russian tsar Peter the Great (Yuri Kolokolnikov), who has been replaced by an impostor.

Elsewhere, The Master’s daughter is travelling across China with English cartographer Green (Flemyng) and a flying gremlin. Elsewhere, Green’s fiancee, Miss Dudley (dubbed Anna Churina), goes against her father’s wishes and follows her beloved. Elsewhere, the princess that commands the dragon with the magic eyelashes – all the better to make magic tea – is yet another imposter. Oh, here comes Rutger Hauer in one of his final roles.

Confused? You will be. The camera darts around like the cursor a hyperactive videogame. The CG backdrops are almost gloriously garish. The overstuffed plot is head-spinning. Arnie and Jackie’s screen time is more limited than their billing might suggest. They do, however, get a terrific stand-off sequence, one of several beautifully choreographed fight scenes – Chan’s team devised the moves – in an otherwise wacky enterprise. The monsters are fun, too.