From Vertigo to Uncut Gems, edge-of-seat films to watch on Netflix, YouTube and elsewhere 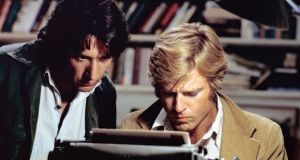 All the President’s Men

Journalists Carl Bernstein (Dustin Hoffman) and Bob Woodward (Robert Redford) investigate the Watergate scandal for the Washington Post in this shadowy, pulse-racing Oscar winner. Many of the great 1960s and 1970s political thrillers are hard to find online, but Pakula’s paranoia trilogy – comprising All the President’s Men, The Parallax View and Klute – is, happily, available. (iTunes, Google Play)

A claustrophobic small town. White picket fences. A troubling discovery that leads to a seedy, violent underbelly. If you’re not sure what makes a David Lynch film “Lynchian” then this noir-thriller doubles as a handy checklist. Kyle MacLachlan is a college student who happens upon a severed ear. Dennis Hopper is a terrifying gangster keeping a lounge singer (Isabella Rosselini) as his sex slave. (Netflix, iTunes, Google Play)

Asger, a Copenhagen police officer temporarily demoted to emergency dispatch duty, takes a hysterical call from a kidnapped woman. The racking drama that follows takes place in a single setting over real time, as the resourceful cop tracks the victim in a series of phone calls. (Netflix, iTunes, Google Play)

Anonymous tapes are left on the porch of well-heeled French couple, Georges (Daniel Auteuil) and Anne (Juliette Binoche), indicating that they are under surveillance. Who is watching them, and might it have to do with an Algerian orphan in Georges’s past? Pay close attention. (iTunes/Google Play)

Two friends stop to pick up the titular passenger only to realise he’s a serial killer on the run who won’t let them go. One of the best films available to watch for free online, Ida Lupino’s taut thriller is often said to be the first film noir directed by a woman. But the blazing Mexican sunlight and all-male credited cast tears up the rulebook for that genre. (Open Culture, You Tube). Watch it here.

The police and the criminal underworld hunt down a serial child killer (Peter Lorre) in prewar Berlin. Lang considered the film to be his finest and hoped it would stand as a dire warning to “mothers about neglecting children”. Almost 90 years on, it still jangles parental nerves. (Open Culture, You Tube) Watch it here.

After his car goes off the road, the author of a series of sensation novels (James Caan) is held captive by a superfan (Kathy Bates, who won an Academy Award for her performance). And she does not care for the latest instalment featuring her literary heroine. (Netflix, iTunes, Google Play)

The debt collectors close in on Adam Sandler’s Howard – a pawnbroker and gambling addict in New York City’s Diamond District – in a film so compelling and stressful that nobody with a heart condition or high blood pressure should watch it. Everybody else should remember to breathe. (Netflix)

An agoraphobic former police detective (James Stewart) becomes obsessed with the woman he is hired to follow (Kim Novak). Hitchcock fans are spoiled for choice when it comes to streaming options: The 39 Steps and many classics are available to watch free. But it’s impossible to top Vertigo, a film many critics consider the greatest of all time. (iTunes/Google Play)

Tony Slattery: Something happened when I was very young. A priest. I was eight
5

Radical Wordsworth: Focusing on the ‘spots of time’ of poet’s greatest work
10