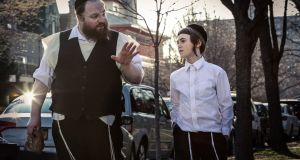 Menashe Lustig as Menashe, with Ruben Niborski. 'I was just blown away by this portly, funny comedian,' says the director. Photograph: Federica Valabrega

Made on a micro-budget, shot guerilla-style over two years, and performed almost entirely in Yiddish by non-professional actors, Menashe is a warm and welcome gatecrasher to this year’s awards season.

On paper, few would have predicted that cinematographer Joshua Z Weinstein’s debut feature, set within New York’s ultra-orthodox Hasidic Jewish community, would have made much noise beyond the festival circuit. But it’s already travelled far beyond the insular community where it was shot.

Shortly after its premiere at Sundance, it became the first foreign-language film to be snapped up for US and Chinese distribution by A24, the rising industry stars behind successful Oscar campaigns for Moonlight and Room. Harry Potter director Chris Columbus came onboard as an executive producer.

“It did well in Shanghai,” says Weinstein. “It’s getting released in theatres in Germany and France and Canada and Scandinavia and Ireland. Menashe himself is in London right now with his son for the premiere.”

Menashe, who lends his name to the first Yiddish film in more than 70 years, is Menashe Lustig, a grocery store attendant who lives in the all-Hasidic New Square, a town located some 40km north of New York, populated exclusively by Skver Hasids. An unusually liberal Hasid practitioner, Menashe had been uploading comic sketches to YouTube for years before he met Weinstein.

“I was just blown away by this portly, funny comedian,” says the director. “He makes these amazing videos. But I could feel there was a sadness about him. A Charlie Chaplinesque quality.”

In common with the character he plays in the film, Menashe, a widower, had lost custody of his son in accordance with Hasidic teachings, which hold that a child must be raised within a two-parent family. These circumstances, however, are where the similarities between the real-world Menashe and his hapless, fictional “schlimazel” (an unlucky chap, in Yiddish) counterpart begin and end.

Most Hasidic Jews want no part of the modern world. The internet is outlawed. Modern movies are outlawed

“The rest of the movie is just me and the result of a lot of improv,” says the director. “We’d sit down and create this character. What would he do in this situation? What would you do? In real life, Menashe is a lot more funny and heartwarming and affable. Menashe went through this situation with his son seven years ago. But the situation was a lot better than you see in the film. They see each other every day.”

Weinstein, who grew up in New Jersey, is Jewish, though neither Hasidic nor Orthodox. Brooklyn’s Hasidic community first caught his attention as a youngster visiting his grandparents near Borough Park, an area that packs 200 synagogues into 200 blocks and boasts the highest concentration of Jews outside of Israel.

“I’ve always been fascinated by Hasidic people. Because they could be my cousins, but our lives are not alike. Yet for my grandparents’ generation back in Poland, there wasn’t that much difference between their lives and the lives of Hasidic people.”

Founded by rabbi Israel ben Eliezer, known as the Baal Shem Tov, in the 18th century, the Hasidic movement was first conceived as a joyful, liberal Jewish sect. Paradoxically, since that liberalisation, Hasidism hasn’t changed at all. “There’s a deep fear that assimilation in any way will just destroy the community,” says Weinstein. “They’re not wrong. If they change anything, it won’t be the same. And most Hasidic Jews want no part of the modern world. The internet is outlawed. Modern movies are outlawed.”

When Menashe Lustig attended the film’s premiere at the Sundance Film Festival, it was his first time inside a movie theatre. “When I was making the movie he kept asking me why. He didn’t think somebody in Ohio or wherever would have any interest in seeing a Yiddish movie with him in it.”

To date, as a cinematographer and documentarian, the filmmaker has profiled the Monaghan-born boxer Kevin McBride (I Beat Mike Tyson), elderly Klezmer musicians (Holocaust Survivor Band), and international jewel thieves (Smash & Grab: The Story of the Pink Panthers).

“This world was too hard to access. You can’t just shoot on the street. You have to pre-plan everything. I quickly learned that you had to fake in order to make it feel real.”

So many people came to one local cinema on the Sunday, that they started a prayer group in the theatre

Accompanied by Menashe producer Danny Finkleman, a Hasidic Jew himself, Weinstein set about gaining the trust of a fiercely tight-knit community. “It took a long time. Of a hundred thousand Jews, we only got about 30 to act in the film. They were really hard to find. We would lose locations all the time. Every day. The scenes set in the supermarket where Menashe works are actually shot in three different supermarkets. Rabbis were calling us up and asking us to stop making the movie. There were so many days when the whole damned thing could have fallen apart.”

Were there particular rabbinical objections? “There was nothing wrong with our movie in particular. But anything modern is regarded as a slippery slope. But that inaccessibility was the whole goal. I wanted to show something that I’ve never seen in cinema before.”

Weinstein, who has previously shot films in Hindi, Tagalog and Mandarin, soon found that making a film in Yiddish – a language he couldn’t speak – posed certain unique challenges. “We rehearsed in English and then we’d shoot in Yiddish. And then the arguments about the language would start. And we’d go back and forth, back and forth, back and forth through the translator. So nothing happened quickly. Which I guess made it more worthwhile in the end.”

He laughs: “Funny thing is, when I made the film with Kevin McBride, the way he speaks English is almost harder to understand than the way Brooklyn speaks Yiddish.”

Remarkably, many from the community elected to finally darken the door of a local cinema once the film opened. “So many people came to one local cinema on the Sunday, that they started a prayer group in the theatre,” says Weinstein. “They were praying so loud that the manager had to move them. They were disturbing other moviegoers. It’s very rare for that community to go to a movie. It hasn’t happened since Shoah screened. It was incredible to talk to people afterwards. They didn’t find this film offensive at all. We all love to see ourselves represented on the screen. They’re no different.”

Menashe is at the IFI from December 8th