Your guide to going out and staying in this week 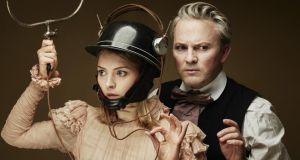 Genevieve Hulme-Beaman and Louis Lovett in They Called Her Vivaldi, which is on at Dublin’s Peacock Theatre.

They Called Her Vivaldi

Theatre Lovett concludes its recent national tour of this popular revived show at the Peacock. In this upbeat comedy adventure for young audiences, Louis Lovett partners with Genevieve Hulme-Beaman to play a father and daughter who live in a haberdashery shop. The evocatively named Edward M Haberdasher has crafted a pair of peculiar earmuffs for his daughter, a sensitive musical-prodigy. When Cecilia Maria’s musical gift is revealed, she quietly begins making a name for herself in a cacophonous world.

The RTÉ Contempo Quartet’s complete cycle of Beethoven’s string quartets reaches its fourth instalment. Two quartets from different periods (in C minor Op. 18 No. 4 and in E flat Op. 74) are separated by Snowline, a new RTÉ commission from Northern Irish composer Deirdre McKay. The composer will be on hand at the premiere to discuss the work with the Contemporary Music Centre’s Linda O’Shea Farren.

West Kerry’s sublime singer and flute player Muireann Nic Amhlaoibh celebrates the release of her solo album, Foxglove & Fuschia, with a tour in the company of two key collaborators on guitar and fiddle. A former member of Danú, Muireann’s gorgeously resonant voice is in particularly fine form these days, and her inventive approach to both old and new material reflects an artist whose mojo is hitting full throttle these days.

There are varying musical options over the weekend. This week Pat Shortt’s Music from D’Telly (Sunday, RTÉ1, 8.30pm) has footage from Dublin’s National Stadium in the 1970s, featuring Dolores Keane, Rita Coolidge and Glen Campbell plus Lindisfarne at the Lisdoonvarna Folk Festival.

Or there’s the live final of The X Factor (7.20pm, Saturday 2nd,TV3, UTV, ITV). This year’s competition has been whipped through quickly, which means it’s already at the grand final stage. Dermot O’Leary presides over the decision on which of the remaining acts will be crowned champion.