During her stint presenting the comedy show, Saoirse Ronan, participated in a skit based on an Aer Lingus flight. Video: NBC/Saturday Night Live 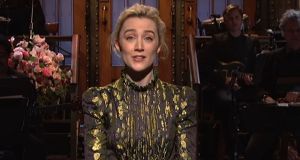 Let us get the rebuttal out of the way first. The unfunny Aer Lingus sketch on Saturday Night Live should cause no Irish person to have a conniption. It is not the end of the world. It may not even be a big deal.

But it does remind us that certain Irish stereotypes hang stubbornly round the American psyche. We twinkle. We’re charming. We wear thick Aran jumpers at all times. We have a near-psychotic obsession with dogs. Sorry? What was that last one? We’ll get back to that.

Ears perked up warily when it was announced that Saoirse Ronan, currently on an Oscar campaign, was to host an episode of the venerable sketch show. Those ears sharpened further when U2 were confirmed as the musical guests.

First launched in 1975, Saturday Night Live has always been a hit and miss affair. Even in its supposed glory days – the era of Bill Murray, Dan Aykroyd and John Belushi – the humour defaulted toward the broad and the bludgeoning.

In recent years, despite still attracting the attention of Emmy voters, it has declined into a morass of sentimental, liberal, button pushing.

They addressed the 2016 election result by persuading Kate McKinnon, dressed as her unthreatening version of Hillary Clinton, to perform Leonard Cohen’s Hallelujah at the piano. At the end she turned to the camera and sincerely intoned: “I’m not giving up and neither should you”.

Excuse me? I missed the last bit over the sound of my own gagging.

More worrying still was an inexpressibly dire parody of Great British Bake Off in which Emily Blunt and Cecily Strong – two hugely privileged people – offered us supposedly comic representations of stupid, poor Englishwomen. This is exactly how Trump and Brexit happened. (No kidding. Voting for Brexit was offered as evidence of the characters’ idiocy.)

So, there was reason to worry about Saturday Night Live’s approach to an Irish evening. Ronan handled the opening with predictable charm before her monologue gave way to yet another comic riff – you’re way ahead of me – on difficulties in pronouncing her forename. This time the same jokes were presented in the form of a bad song.

Nothing more fully confirms her professionalism than her ability to smile through these increasingly repetitive riffs.

Saoirse popped up in a few ho-hum sketches and in a more than tolerable one concerning sexual assault in the entertainment industry. Then there was that Aer Lingus bit.

What to say? It’s no big deal. It’s not the end of the world. But no British sketch show would now even attempt these levels of Paddywhackery. Saoirse adopted a mammy voice as a stewardess called Colleen (because we all have American names now). Cecily Strong, playing the other flight attendant, varied between a recognisable Irish accent and a noise you’d expect to emerge from a Welsh Smurf.

The opening joke was about the similarities between the airline’s name and a Latin-derived term for oral sex. Don’t snort. There have been less sophisticated riffs on recent series of SNL.

McKinnon then emerged in one of several Aran jumpers to announce that the flight was delayed due to a dog on the runway. “It has sad eyes and the soul of Oscar Wilde. So we’re going to have to wait,” she said in another wavering accent.

This line seemed to reference Irish stereotypes concerning the wistful poet. You know. People in tweed waistcoats and those pillbox hats that Sean O’Casey used to wear. I would suggest that my hand was now itching for the revolver, but I wouldn’t want to encourage gags about terrorists (about the only thing they left out).

There was then some eye-watering stuff about the fact that we eat nothing but potatoes. “We’ve got purple potatoes and we’ve got salmon,” a third attendant announced. “Sorry I misread that. The salmon is also potatoes.”

Time to ponder whether some independent notion of funniness can alleviate potential offence. If there were a decent gag in there nobody would awkwardly recall the connotations of the potato in Irish history. No viewers would find themselves considering why so many Irish ended up in the United States. There were no good jokes.

But I digress. This is no big deal. It’s not the end of the world.

The comic riff that attracted the most puzzlement at home was that concerning the Irish attitude to dogs. The pilot has several. They’re swarming over the passengers. Everybody has a bleeding dog. Dogs are our thing, apparently.

Much was the scratching of heads on social media. Is there a dog in The Quiet Man? It seems equally likely that the author of the sketch spent a weekend in Ireland and saw a lot of dogs. I once saw a Llama in Budapest (this is true). If I ever write a sketch about Hungary those beasts will be all over the Chain Bridge.

Ah look, Colleen says, “Maeve’s got her fiddle out.” It ends with a shot of the wee plane on the wee runway.

Where in the name of blazes does this notion of Ireland come from? The canny Clancy Brothers adopted the white Aran jumper over 50 years ago as a way of telegraphing (or fabricating) their rustic authenticity. Only two types of people now habitually wear them in Ireland: fishermen and American tourists trying to look “Irish”. The poetic whimsy dates to ancient sentimental songs. The sense of careless semi-efficiency was shaken off decades ago.

The people at Saturday Night Live would not represent Mexicans in such stereotyped fashion: sombreros, donkeys, other stuff from Speedy Gonzales. There is, of course, a distinction there involving domestic power structures. SNL probably would put berets on French characters and demand they sell onions.

But the distinction is also about how Irish Americans see themselves. If you dress up as leprechauns on Saint Patrick’s Day and vomit into newly green rivers then it’s hard to complain if entertainers invoke variations on that imagery. Still, they could have tried just a little harder. Just a little.

Anyway, it’s no big deal. We shan’t be demanding the return of our ambassador. Saoirse will still get (and deserve) her Oscar nomination for Lady Bird.

Behemoth: The Satanist who took on the Polish government and won
10