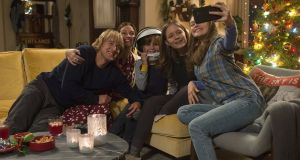 Before the studios became entirely fixated on franchises, Hollywood used to make inspiring dramas that ended with standing ovations or children joyfully running toward the cameras. Audiences would leave with life lessons and snivelling into the sleeves. Wonder is just such an old-fashioned delight. Your brain may have cynical questions. Your brain is going to shut up. Even if you somehow manage to withstand the mighty screen chemistry of Wilson and Roberts and the cuteness of Tremblay, nothing can counter the emotional clout of Sonia Braga as Via’s late grandma. And did we mention the puppy? TB

A bourgeois family squabble bitterly in their Calais home. Nobody who’d seen a Haneke movie could mistake the icy, rigorous Happy End for the work of any other film-maker. The characters are allowed the full spectrum of experience from boredom through flinty anger to suicidal depression. Christian Berger shoots it with a camera that never mistakes light for warmth. Happy End doesn’t have the bite of the best Haneke work. But it remains a troubling, blackly funny soap opera. DC

Franco hits directorial gold with a good-natured drama following the creation of “the worst film ever made”: Tommy Wiseau’s belated cult hit The Room. It’s a tribute to Franco’s skills that his depiction of Wiseau is simultaneously hilarious and endearing. Adapted from the award-winning 2013 memoir The Disaster Artist: My Life Inside The Room, Franco’s 14th film as director casts brother Dave (excellent) as Greg Sestero, the line producer and star of The Room. A second cult looms. TB

It’s 1834, and on the back of three flops, Charles Dickens could really use a bestseller. Desperate, he bangs out A Christmas Carol. Oh, the compound ironies: Dan Stevens, the man who ruined Christmas for millions in 2012 (when his Downton Abbey character Matthew Crawley was killed off), is back to restore the festivities. His Dickens is all ribald energy and the film around him is better than we had a right to expect. God bless them, every one! TB

The singular director of Silence returns with a superb study of the legendary sean nós singer Joe Heaney. The music is terrific. It is, however, Collins’s figurative voice that registers most strongly with the viewer. Weaving archival footage in with Richard Kendrick’s bewitching, clean monochrome photography, the director blurs the lines between documentary, expressionist flourish and biographical drama. Some viewers may yearn for a touch more narrative drive. But nobody will emerge unmoved. DC

Hugely entertaining, impressively compassionate attempt to dramatise the 1973 tennis match between Billie Jean King (Stone), legendary champ, and arch self-publicist Bobby Riggs (Carell). Carell hams with abandon as a chancer constantly surveying the horizon for his next mark or hair-brained scheme. Stone brings out the gentleness in a famously tough competitor. At 121 minutes, Battle of the Sexes occasionally drags, but it’s the Feminist V Male Chauvinist Pig showdown that we need right now. TB