Oscars scandals: ‘Racist’ Three Billboards and ‘paedophilic’ Call Me by Your Name

Many of this year’s nominees have attracted controversy. Is something sinister going on? 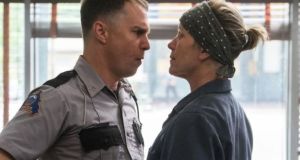 Much in the same way that a candidate may be vetted before a big convention, so too have this year’s nominees for the best picture Oscar been subject to a battery of litmus tests. As the awards race has ramped up in recent months, the nine films in contention for the night’s biggest prize have attracted more controversy than any slate in recent memory. And to keep with the metaphor, much of the hubbubs swirling around these films have been political in nature; in the Academy, winners aren’t so much chosen as they are elected.

All opposition, however, is not created equal. While the pushback against some of these films is founded in legitimate artistic objection, other campaigns opportunistically seize on bad-faith arguments to undermine a movie’s profile. Some of the reactions could qualify as “backlash,” the equal and opposite response to an excess of hype that brings a movie’s expectations back down to Earth from the stratosphere; at the same time, the critics mounting such counteroffensives may deny that they’re strategically calibrating at all, but rather lodging valid grievances that just happen to arrive later in a film’s media cycle. Some debates have arisen from content within these releases, and others from the circumstances of their production. But nobody’s making it to Oscar night scot-free. In the parlance of the Christopher Nolan-era Batman: you can die an ethically thorny creative text in relative obscurity, or live long enough into the Oscar race to see yourself become problematic under public scrutiny.

Future generations of Oscarologists shall closely study this year’s trajectory for odds-on frontrunner Three Billboards Outside Ebbing, Missouri. When Martin McDonagh’s tangled black comedy premiered at the Toronto film festival back in September, reviews from the press in attendance were widely positive, and audiences bestowed upon it the festival’s coveted People’s Choice Award (a reliable predictor for Oscar glory, having gone to La La Land and Room in the past two years). The reception was considerably frostier when the film made its theatrical debut a couple months later in the states, as a growing faction of detractors railed against what’s been characterized as excessively lenient treatment from McDonagh for the racist cop character portrayed by Sam Rockwell. Even McDonagh himself has entered the fray, releasing a statement about his “deliberately messy and difficult” morality play.

Major media outlets have raced to place this tidal change in its cultural context, running explainer pieces examining how a festival darling and Golden Globe magnet could have incited so much ire. The wisest among them have noted that the press at Toronto was largely white, and that the film’s later exposure to a wider plurality of perspectives may have revealed some nuances otherwise going unnoticed. The cases against the film have been valiantly and passionately argued, backed with textual evidence and sound logic; if only that rigor was de rigeur.

Some highly specific (read: hyper-conservative) circles of discourse have seized on Luca Guadagnino’s swooning romance Call Me By Your Name as a new cause for watchdog alarm. Because the best picture nominee centers on one hot summer’s relationship between Elio (Timothée Chalamet) and Oliver (Armie Hammer), and because these characters are respectively 17 and 24 years of age, the valiant defenders of Fox News have leapt to the helpless citizenry’s aid. Branding its tender courtship as pedophilia despite Italy’s age of consent being set at 14, the Fox set, James Woods and professional contrarian Armond White denounced the film and how it reflects on the sexual climate of Hollywood.

It’s a rather flimsy argument, considering the mutual respect and tenderness clearly undergirding Elio and Oliver’s love (and at least it’s not “Get Out promotes white genocide,” truly the hottest take of all) but it attempts to blend in with a larger swell of concern that’s been more appropriately applied elsewhere. Prognosticators speculate that the surprise omission of acting showcase I, Tonya from the Best Picture category may have something to do with the film’s glib treatment of domestic abuse, or its shaky absolution of its subject. Margot Robbie and Allison Janney made the cut in their respective categories, but the vessel containing their complicated, often contemptible characters goes far too easy on the both of them.

With projects that have attracted ire due to real-world matters beyond the script itself, the hard information on hand may be more black-and-white, but its utility is anything but. What are we – that is, we ordinary folk not permitted to vote for Academy Awards – to do with the awareness that best picture contender Dunkirk was produced in part using prison labor, or that Nolan’s framing entirely erases the numerous Indian soldiers present for the evacuation of Dunkirk beach? Do the accusations of plagiarism levied by French filmmaker Jean-Pierre Jeunet or the estate of playwright Paul Zindel against The Shape of Water hold water, or is it simply a case of over-affectionate homage? How we react is dependent upon a personal moral calculus, but in either case, that this will hurt their chances with the Academy is unlikely.

It’s straightforwardly reprehensible that Best Actor shoo-in Gary Oldman has an alleged history of abuse and rather dismissive attitudes toward it, but that certainly didn’t stop Casey Affleck from picking up the same prize last year. Loose soundbites from the Academy voting body suggest a split along generational lines, with older voters approaching their selections in a sort of vacuum insulated from outside morality and younger voters taking the more holistic view that the statuette is given to the person and not the performance itself.

When a film amasses unilateral praise, it’s perfectly natural for the scant few who don’t see the appeal to accordingly raise their voice, if only to be heard above the din. But that doesn’t excuse the dissenters from the standards to which we hold their fellow critics; namely, backing up bold claims and making some basic semblance of sense. Behold the spectacle of one LadyBird detractor politely informing Gina Rodriguez that the depiction of poverty the actress related to was actually not present in the film. Daring breaks from consensus make a body of criticism stronger and more consistently interesting, but as they say back at university, you’ve got to show your work.

Dating Amber: A story about two gay teenagers, being each other's beards
2

‘There is something very cool about Irish people’
4

Nick Cave: ‘As long as I can remember I’ve had a pre-disposition toward violent thought’
Real news has value SUBSCRIBE