The Shape of Water: Most Oscar nominated movie is a lovely thing

Review: The favourite for best picture Oscar is a happy rom-com starring a B-movie creature

Official trailer for The Shape of Water. 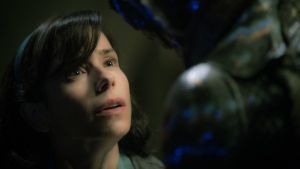 Sally Hawkins and Doug Jones in The Shape of Water, directed by Guillermo del Toro

Film Title: The Shape of Water

Be in no doubt. The current, slight favourite for the best picture Oscar is a lovely thing.

It has taken over 60 years, but Guillermo del Toro has turned The Creature from the Black Lagoon into a prestige picture that can share the unembarrassed company of Churchill flicks and Meryl Streep vehicles.

As she did in the under-garlanded Maudie, Sally Hawkins reminds us that there is nobody better at turning robust fragility into something other than a paradox.

Playing Elisa, a mute woman and a cleaner in a sinister Cold War facility, she allows herself to be awakened into sexual maturity by a gill monster with an appetite for household pets. That’s something you won’t get in The Post.

Exploiting the ongoing fetishisation of mid-20th century iconography to (ahem) saturation point, The Shape of Water is a symphony in shades of green. It is, indeed, the greenest film I can remember since, in 1981, Walter Hill did something swampy to his footage for Southern Comfort. Even before Elisa floods her bathroom to the ceiling, Baltimore of the early 1960s seems submerged in algae-ridden brine.

There’s a metaphor at work here (there are a lot of metaphors at work here). The US is still deadened by post-war complacency and post-McCarthy oppression.

If you were in any doubt, Colonel Richard Strickland (Michael Shannon) is here to press the point home by wielding an electric cattle prod while racist cops are doing the same in adjacent news footage. He lives in a white-bread house. He heaves drily atop his wife as all suburban Americans did until the US release of the Beatles first LP (unless pop culture has led me wrong).

A humanist of the most fantastic stripe, Del Toro is sincere in his desire to celebrate other, more-open Americas.

It is the damaged, unspeaking Elisa who befriends the scaly, semi-humanoid (Doug Jones) – referred to, in a favoured term of Twitter cranks, as a “CIA asset” – by first sharing her lunch and then staging a dramatic rescue. She is helped by a working-class African-American woman (reliable support Octavia Spencer) and an older, cat-loving gay man (equally reliable support Richard Jenkins). The kinder future is all there.

Anybody who savoured Del Toro’s work on magic epics such as Pan’s Labyrinth or The Devil’s Backbone will be very much at home in The Shape of Water’s universe. Alexandre Desplat’s score wheezes warmly beneath a story that powers towards an epiphany so inevitable that … Well, if you haven’t worked that out we won’t spoil it for you now.

The film is packed full of familiar references: ET, Beauty and the Beast, Hunchback of Notre Dame. Everyone finds something interesting to do with their character.

For all that, The Shape of Water trades in a very safe class of transgression. A nagging suspicion that The Creature from the Black Lagoon would be better off remaining in the grindhouse proves hard to shake.

By stripping genre conventions of their mucky roots, Del Toro succeeds in creating a monster film for just about anyone. (The already infamous inter-species sex scenes happen behind the sort of cautiously drawn curtain that once shielded Doris Day and Rock Hudson.) The grubbiness was, however, surely once part of the appeal.

Del Toro has dragged the B-monster into a happy rom-com universe where there’s always a friendly gay man down the corridor and a broadly drawn, African-American second-fiddle in the work place.

None of this is exactly offensive. Maybe lack of offense is the problem. Del Toro has employed a lifetime of horror fandom in the creation of a scary movie that wouldn’t scare a day-old kitten.

Oh, it doesn’t matter much. The Shape of Water still works well on its own middle-stump terms. It’s a lovely thing. We are, however, allowed to hope that Del Toro next turns to something less lovely.