Irish production The Favourite, starring Olivia Colman, Emma Stone and Rachel Weisz, is among the eight nominees for Best Picture at the 2019 Academy Awards. Video: The Academy 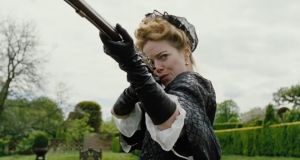 Emma Stone in ‘The Favourite’

The Irish production The Favourite has received 10 nominations for this year’s Academy Awards including a nod for best picture. It is, alongside Alfonso Cuaraon’s Roma, the most nominated film of the 91st awards. Two short films by Irish directors were also nominated.

The Favourite, Yorgos Lanthimos’s dark comedy, concerning intrigues at the court of Queen Anne, thus becomes the most nominated Irish film ever at the Oscars.

Dubliner Robbie Ryan picked up a mention for best cinematography. Among the finest directors of photography currently working, Ryan is also known for work on such films as I, Daniel Blake and Philomena.

Olivia Colman was mentioned in the best actress race for her role as Queen Anne. Emma Stone and Rachel Weisz, continuing a successful awards season, are both nominated for best supporting actress.

Ed Guiney, producer of The Favourite for Element Pictures, told The Irish Times: “The production of this film was a bit like the film itself  – at times bloody, very dramatic, full of intrigue and black comedy. So happy that this is the outcome – I have been having flashes of the alternate headlines: ‘Oscar Snub!’ So I’m happy that didn’t happen.”

Robbie Ryan was working on a film in London when the news came in. “I was in a production meeting and a few of the crew arrived and said: ‘You’ve just got nominated for an Oscar!’” he said. “I don’t really have any plan in life. I like making films and it’s great to be involved with a film that gets a lot of love. I learned a lot working with Yorgos. This nomination has as much to do with him as me.”

Louise Bagnall’s Late Afternoon, produced by the Cartoon Saloon in Kilkenny, received a nomination for best animated short. Bagnall’s film follows a woman with dementia as she seeks to reassemble past memories. There was a nomination in best live-action short for Irish director Vincent Lambe’s controversial Detainment. Assembled from transcripts of interviews with the boys convicted of the Jamie Bulger murders, the film has already drawn angry criticism from the victim’s family.

Also among the best picture nominees, announced by Tracee Ellis Ross and Kumail Nanjiani at the crack of dawn in Los Angeles, were: Alfonso Cuaron’s Roma, a monochrome study of life in 1970s Mexico City; Bradley Cooper’s A Star Is Born, a third remake of a show-business classic; and Peter Farrelly’s Green Book, a sentimental study of the relationship between an African-American pianist and his goodfella driver in the segregated south.

The arrival of Ryan Coogler’s Black Panther, a superhero epic from Marvel, in the best picture race will come as relief to the Oscar organisers. This is the first time in a decade – and only the second in 20 years – that the year’s highest grossing film at the US box-office has received a best film nod.

The mention also recognises the increasing visibility of African-American talent in the industry. But the push for diversity had some setbacks. Not a single film by a woman was listed among those competing for best picture or best director.

As has been the case in recent years, the fight for best picture looks like a close one. A Star Is Born was declared early favourite on its debut at the Venice Film Festival in late August, but it underperformed at the Golden Globes. When Green Book took the top award at the Producers Guild of America on Saturday night, that film edged forward with tipsters.

Among the best picture nominees, Roma seems the other most likely winner. Cuaron’s Mexican saga, made for Netflix, would become the first ever foreign-language winner and the first winner made by a streaming service.

Lady Gaga, who stars as a rising singer under the influence of Cooper’s alcoholic rock star in A Star Is Born, is nominated for best actress. She looks to be in a three-horse race with Colman and Glenn Close, nominated for The Wife. Close, regarded as long overdue after six nominations and no wins before today, would be a popular victor, but The Wife has been little seen.

The best actor race is also short a runaway favourite. Christian Bale, nominated for his role as Dick Cheney in Vice, ate himself to mountainous size – always persuasive with voters – but he will receive fierce competition from Rami Malek, up for his turn as Freddie Mercury in Bohemian Rhapsody, and Bradley Cooper from A Star Is Born.

Bohemian Rhapsody has been the surprise player of the season. After enduring a troubled production – director Bryan Singer was sacked in mid-production – and picking up indifferent reviews, the picture became a box-office sensation and winner at the Golden Globes for best drama and best actor. Malek looks like slight favourite here.

Weisz and Stone may cannibalise each other’s votes in the race for best supporting actress. The probable winner is the veteran actor Regina King for her turn as an African-American woman trying to right a wrongful arrest in Barry Jenkins’s beautiful, sad If Beale Street Could Talk.

Amy Adams, nominated as Lynne Cheney in Vice, is in danger of becoming an Oscar runner-up to compare with Close. None of her previous five nominations has led to a win.

Category fraud is afoot in best supporting actor category. Mahershala Ali, who won the same award two years ago for Moonlight, is nominated for his persuasive turn as Don Shirley, sensitive, educated pianist, in the controversial Green Book. He is good in the film, but he surely shares lead status with Viggo Mortensen.

His closest competitor may be Richard E Grant, revisiting Withail and I territory as a boozed-up wastrel in the excellent drama Can You Ever Forgive Me?

The 91st Academy Awards take place in Hollywood on February 24th. Following the withdrawal of Kevin Hart as host, the ceremony looks likely to be the first with out a formal compère since 1989.

Rob Delaney: ‘As my career took off, my son got sick...then he died’
7

Hunt for the Wilderpeople review: super all-ages adventure with a hint of danger
Real news has value SUBSCRIBE