Monsters and Men: A sure-footed study of racial disharmony 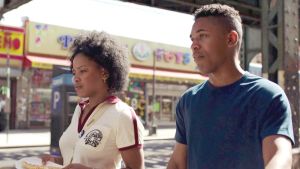 Reinaldo Marcus Green’s thought-provoking debut feature concerns an incident in which an unarmed black man is shot dead by police on a Brooklyn street corner. There are obvious parallels between Monsters and Men and the Eric Garner case, but Green isn’t interested in a straight-up procedural.

His film unfolds as a triptych, in which each segment chronicles a compromised, complex set of ethics and concerns.

Dennis (John David Washington) is a black New York police officer. An early encounter with a traffic cop demonstrates that he’s more than aware of the systemic prejudices that exist in his workplace, but he’s equally aware that he and his colleagues are forced to make impossible decisions everyday.

His African-American friends expect him to take a stand when Big D (Samel Edwards), a harmless hustler who sells loose cigarettes outside a Bedford-Stuyvesant deli, is shot and killed. The same incident is recorded by Manny (Anthony Ramos) on his phone.

Manny is a former felon hoping to make a new life for himself and his young family. Uploading the video is the right thing to do but it can only jeopardise his precarious situation. The third story concerns Zee (Kelvin Harrison jnr), a promising high-school baseball star.

When the youngster is harassed by cops on the street, he ignores his father’s advice to keep his head down, and becomes involved with activists, led by local firebrand Zoe (Chanté Adams).

There are no answers here, easy or otherwise, only dilemmas and counterpoints. A remarkably sure-footed first film from writer-director Green.

Martin Scorsese: ‘Crime is glamorous at first if you’re young and stupid’
7