Performer celebrated for her performances in ‘Gentlemen Prefer Blondes’ and ‘Hello, Dolly!’ 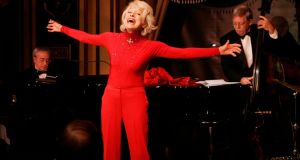 Carol Channing performs during her one woman show, The First 80 Years are the Hardest, in New York in 2005. Photograph: Richard Drew/AP

Carol Channing, whose incandescent performances as the gold-digging Lorelei Lee in Gentlemen Prefer Blondes and the matchmaker Dolly Gallagher Levi in Hello, Dolly!, made her a Broadway legend, died early Tuesday at her home in Rancho Mirage, California. She was 97.

Her death was confirmed by her publicist, B. Harlan Boll, in a telephone interview. She had suffered two strokes during the past year, he said. Channing was bringing audiences to their feet night after night in a revival of Hello, Dolly! when she was 74 – appearing at the top of the staircase singing, “Wow, wow, wow, fellas,/Look at the old girl now, fellas,” resplendent in her scarlet gown and jewels, her platinum hair crowned with red plumage.

Some 10 years later she was still getting applause, this time for a cabaret act. Nine years after that, just a few days before her 93rd birthday, she appeared at Town Hall in Manhattan as part of a celebration of the 50th anniversary of the night Dolly opened.

“Performing is the only excuse for my existence,” she said during her last Broadway appearance, in the 1995 revival of Hello, Dolly!. “What can be better than this?”

Channing was one of the most recognisable presences in the theatre world. Her tousled hairdo, headlight-size eyes and exaggerated mouth were the subject of countless caricatures. Channing’s voice, gravel-toned and capable of sinking to subterranean levels, was as distinctive as her appearance. When she sang a song in her exaggerated growl, it belonged to her forever; only Louis Armstrong’s own growling rendition of Hello, Dolly! was a match for hers.

The tall, flamboyant Channing became a Broadway star at the Ziegfeld Theatre on December 8th, 1949. That was the opening night of Gentleman Prefer Blondes, a musical based on Anita Loos’s bestseller of the 1920s, with music by Jule Styne, lyrics by Leo Robin and choreography by Agnes de Mille. Channing starred as the flapper Lorelei Lee, and her stardom was assured when she sang Lorelei’s anthem, Diamonds Are a Girl’s Best Friend.

Time magazine summed up her performance: “Perhaps once in a decade a nova explodes above the Great White Way with enough brilliance to reillumine the whole gaudy legend of show business.” Brooks Atkinson, the drama critic of The New York Times, hailed her Lorelei Lee as “the most fabulous comic creation of this dreary period in history.”

Hello, Dolly!, with a score by Jerry Herman, opened at the St James Theatre on January 16th, 1964, and received ecstatic reviews. It went on to win 10 Tony Awards, including one for Channing as best actress in a musical. Hello, Dolly! ran for almost seven years on Broadway. Ginger Rogers assumed the title role when Channing left to take the show on the road in the summer of 1965, and Pearl Bailey, Ethel Merman and other marquee names later played it, as well. (Bette Midler and Bernadette Peters starred in a hit Broadway revival that began in 2017.) But ultimately the part belonged to Channing, who toured with revivals in 1977, 1982 and 1994.

By the time she returned to the role on Broadway in October 1995, Channing had played Dolly more than 4,500 times. She remained active well into her 80s. Reviewing her performance at Feinstein’s at the Regency in 2005, Stephen Holden of The Times wrote: “Although substantially diminished in power, Ms Channing’s blend of unbridled optimism and ferocious vitality is still a primal show business force field. At 84, she personifies the adult child as natural show-off and clown, brimming with curiosity and humour, accentuating the positive.”

Channing’s first two marriages, to Theodore Naidish, a writer, and Alexander Carson, a professional football player, ended in divorce. She had a son, Channing, by her second husband; he was later adopted by her third husband, television producer Charles Lowe.

Channing and Lowe were married in 1956, but were estranged at the time of Lowe’s death in 1999. In 2003, Channing married Harry Kullijian, who had been her junior high school sweetheart. He died in December 2011. She is survived by her son.

Channing once said that she hoped to die like David Burns, her original co-star in Hello, Dolly!, who got a big laugh in 1971 in a tryout of the musical 70 Girls 70 in Philadelphia and then keeled over onstage while the laugh continued.

“The audience didn’t know there was anything wrong, you see,” she said. “He died hearing the laugh build. I can’t think of a better way to go.” – New York Times