Life through a screen: Cinematic space and social distancing

Can films inspire us as we navigate the limits of confinement via computers and phones? 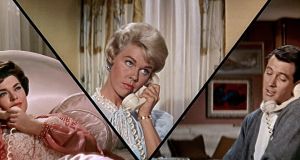 Pillow Talk: the developing romance between Doris Day and Rock Hudson’s characters is presented using split screen framings while they’re technically only talking on the phone.

An increased reliance on screens is one of the notable consequences of Covid-19 for the general population. Alongside social distancing and restrictions on in-person meetings and teaching, we have seen a sharp increase in the use of digital communication tools for work and social interactions. These include video conferencing apps like Zoom and its more informal equivalent, House Party.

Since the classification of Covid-19 as a pandemic, many experts have made comparisons with the outbreak of the Spanish flu in 1918. One key distinction, however, is that Spanish flu came before the widespread introduction of screen-based media: still in the early days of cinema, it was decades before television would bring smaller screens into the home. And it was some 90 years later that laptops and smart devices would become a ubiquitous technology for most.

While this pandemic is also being communicated via literary and audio formats (newspapers, radio), it has undoubtedly increased our dependence on digital technologies and screens. With people unable to travel, publications have taken to posting photos of empty streets in megacities like New York and London. Their unnaturally vacant spaces recall elaborately constructed film sets which, similarly, are always out of reach.

As people adjust to the dynamics of a video conference, we may find ourselves comparing what we see to historic film conventions

Students of all levels are being taught via lecture recording and video streaming. Stories abound of elderly people who have learned how to use apps like FaceTime to communicate with their families while cocooning. Religious figures have embraced recording technologies to deliver services to their parishes online. Closed museums and galleries are finding creative solutions to keep their staff and cultural missions going, often by making collections accessible via virtual tours. Similarly, a whole range of performing arts venues have worked to stream new performances or formerly recorded productions of theatre, dance, and music.

The success or failure of shifting everyday interactions into screen-based experiences is partly a question of formal choices: selecting the best platform, picking an appropriate angle and distance from the camera, and ensuring that the lighting conditions do not turn you or your subject into a flare of white light. As such, the conventions of traditional screen media, like cinema, can help us to understand the nuances of this sudden shift.

As people adjust to, say, the dynamics of a video conference layout (users’ choice of webcam angles and backdrop), we may find ourselves comparing what we see to historic film conventions like direct addresses to a camera, or narrative experiments with split screens. How do we navigate a visual space with multiple, competing “characters” or focuses of attention? How can we engage meaningfully with people through the two-dimensional space of a screen?

Below, I identify a range of historic and contemporary screen media that might help us adjust to certain norms of digital screen culture, as they become an increasingly significant part of our daily lives. And while we may find the process of spending so much time living within the space of a screen to be claustrophobic, these works offer lessons on how such visual spaces can be purposefully channelled: to tell stories or to encourage us to see something anew.

Long before smartphones, Hollywood used props that anticipate smart devices’ ability to provide a window onto the world via a screen-within-the-screen. In Preston Sturges’ The Lady Eve, con artist Jean Harrington (Barbara Stanwyck) employs a hand mirror to such an effect, using one to spy on a man in a restaurant. Staring into her rectangular mirror, Jean is absorbed in the scene she watches. Her live narration, presented in tandem with the scene in the proto-smartphone mirror, anticipates our current reliance on videocalls via handheld devices.

The split screen remains a familiar trope of romantic comedies. Unlike with this film technique, in video conferences we (rather than just the audience) can see the people to whom we’re talking. But films like Pillow Talk encourage us to watch for subtleties of body language in virtual meetings. Perhaps looking for silent participants’ reaction shots is more rewarding than watching the speaker?

Michael Haneke’s film offers insights into the mediation of viewing when a French family are terrorised by mundane recordings of their apartment building posted through the door. At points throughout, audiences come to realise that they are watching a screen-within-a-screen, as when a recording that the characters (and the audience) are watching is suddenly paused or rewound. The production design purposefully plays with our depth perception, as with the wallpapered bookshelves on the set of the literary television show of the main character, Georges.

Like video conferencing app Zoom’s option for users to replace their background with a virtual one, Georges’ television show positions him in front of a 2D wall of books in a way that encourages us to recognise his television persona as a facade.

Many museums and galleries are encouraging people to engage with their collections from home. While good in theory, virtual tours can feel like a poor comparison. How do you recreate the dynamic staging of a museum or gallery in a screen medium, particularly when it involves imposing a singular point-of-view for how the art or objects are seen?

Lessons can be learned from Aleksandr Sokurov’s Russian Ark. Shot in a single, 96-minute take, an unnamed narrator wanders through the vast collection of the Hermitage Museum in St Petersburg. Fusing art criticism with national history, the guide moves through rooms corresponding to various periods in Russia life, at times interacting with characters from this past. Fluid camera movement and the anchoring figure of the narrator makes for a particularly engaging virtual tour.

A personalised map website (2kmfromhome.com) was launched alongside the government’s instructions on March 27th that non-essential movement should be contained to a 2km radius. Using location tracking, the map provides us with a circle for approved movement and encourages us to reconsider our relation to space and, perhaps, to exercise in areas that would normally go unvisited.

This use of an interactive map is similar to those found in various web-based documentaries, such as the National Film Board of Canada’s Bear 71. Filmed in Banff National Park, using stationed cameras to record one tracked bear’s movement, the documentary requires users to orient themselves in relation to the bear and other animals on an interactive map. Like with the 2kmfromhome site, the map underlines feelings of confinement.

And if you get bored of your own map you can always visit Bear 71’s instead: http://bear71.nfb.ca

Direct address to camera: About Endlessness (2019)

Swedish filmmaker Roy Andersson is known for presenting melancholic characters trapped in everyday spaces. In films like You, The Living (2007) and About Endlessness, Andersson’s screens are marked by stillness, giving a symbolic weight to tiny movements within the shot. Characters stare out blankly at the audience from highly constructed sets. Drawing inspiration from painters like Edward Hopper and Pieter Bruegel the Elder, Andersson’s images capture the everyday loneliness and sense of claustrophobia that we might equally note of the present moment.

Our current dependence on screens has led to a range of strategies to socialise via a shared screening. “Covideo” parties are being organised on Twitter and Facebook, where audiences recreate the social aspects of cinema-going by commenting live on a pre-selected film that is watched at a particular time.

On one Cork street, a man has taken to projecting films like Gentleman Prefer Blondes (1953) on to the side of his house. Recalling the earlier popularity of drive-in movie theatres in the United States, Scott Duggan’s neighbours share a single large screen while tuning into the soundtrack via radio. Even with our increased dependence on small screens, the appeal of an improvised big screen remains.