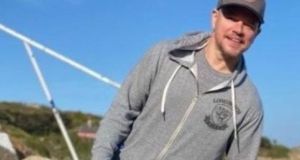 In a very funny scene in the film that’s sure to emerge from Matt Damon’s accidental sojourn in south Co Dublin during the Covid-19 shutdown, the people of Dalkey came out over the weekend to defend the Hollywood star from prying paps.

Well, not quite prying paparazzi, but a journalist named Heather Murphy, who introduced herself on the Dalkey Open Forum Facebook page. “Hello Dalkey residents,” she wrote. “I’m a New York Times reporter writing a story on life in Dalkey right now. This is connected to reports that residents have been delighted by sightings involving a new neighbor: actor Matt Damon.”

The general response? “Ah, leave him alone, Heather.” As one poster put it: “It’s one of the reasons why celebs love Ireland: they get left alone and treated like a normal human.”

Then locals began to lead Murphy up the garden path. Michelle Jenkins tweeted: “I heard he’s moved to the east pier. He’s pitching a tent at the end of it, but if this lockdown continues he won’t need a tent – he can borrow me knickers; they be big enough for a circus.”

Half expecting him to ask me for a euro for the hostel. pic.twitter.com/ykX6EHBFWH

Paul McDaid posted: “Hang on a moment, Bono lives in Dalkey 365 days a year! And the NYT is interested in Matt (seems like a sound lad)? Come on NYT, sense of perspective please.”

Most comic traction probably came from Brian O’Farrell’s Facebook remark: “I seen him down the nudist hangout down the Vico” – the nearby swimming area favoured by naturists – “I tell you this, he has no bother keeping the social distance.”

The New York Times reporter, who was only doing her job*, may have got more than she bargained for. She followed up: “Thanks everyone for your responses. Though they scared me at first, I have actually enjoyed them quite a bit. I feel like I have a much better sense of Dalkey than when I began.”

Damon has been isolating with his family in Dalkey for weeks, since getting stuck here when the film he was making with Ben Affleck – The Last Duel, directed by Ridley Scott, and being shot partly in the village of Bective, in Co Meath – was paused because of coronavirus.

He’d already charmed locals by posing for photographs; a snap of him at the coast, in a baseball hat and with a SuperValu bag, led to more crack about him going down to the sea with his togs in a shopping bag for a swim, or that he was in method-acting training for an Adam & Paul sequel.

In a weird twist, Damon starred a few years ago in Contagion, a disaster movie about a pandemic that eerily prefigured reality (and is doing a bomb on Netflix). As Paraic O’Donnell observed: “Wait, so the one guy in Contagion who had natural immunity is currently trapped in Dalkey? I’m not saying we should experiment on Matt Damon, I’m just saying it wouldn’t hurt to have the ethics paperwork ready to go.”

* At The Irish Times we’d be as happy as the next person to have a chat with Matt Damon about how he’s getting on in Dublin during lockdown – feel free to get in touch, Matt