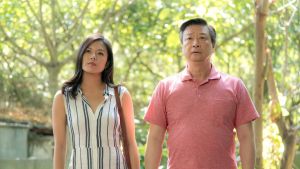 Tigertail is on Netflix from April 10th

Alan Yang, who has written for Parks and Recreations and Master of None, stretches out satisfactorily with this slight but enchanting tale of the Taiwanese diaspora in the US. One mean part of the brain wonders what Ang Lee in his prime would have done with similar material. Greater emotional traction? More nuanced relationships? But that would be to undersell an impressive first feature.

The picture follows the life of a Taiwanese man named Grover who, raised in poverty, takes a bet on emigration to the New World and eventually finds a life of modest satisfaction. After a prologue set in the old country, we zoom forward to find that, as so many do, he has taken on the conservative habits he once abhorred in his parents. He scowls at his daughter, but she understands their souls are cut from the same cloth.

The story rhymes with such diverse immigrant stories as The Godfather Part II and In America. The new country is as exciting as it is frightening. Parents want their children to adapt, but not so much as to become strangers. Yang teases out interesting details that nobody from outside his community would risk addressing.

Shortly after they arrive in the US, Grover’s wife, Zhenzhen (Fiona Fu), encounters a fellow Taiwanese woman in the launderette. “I thought you were Korean,” her new friend says. Zhenzhen explains (apparently this counts as an explanation) that she is from the central region of the country. I’m learning here. I’m learning here.

What makes Tigertail work, however, are the elegantly acted relationships between the key characters. Christine Ko has just the right level of exasperation as a daughter who knows frustration is an unavoidable symptom of loving a parent. The familiar Hong Kong-American Tzi Ma is better still as the older incarnation of Grover. The general and the particular are wound up in his sad face. He represents legions, but is also a fresh, rounded character in his own right.

The film is, for all that, just a little underheated. The gorgeous, walking string orchestrations and the smoky cinematography can’t wholly compensate for a lack of dramatic oomph. A commendable Netflix premiere nonetheless.

On Netflix from April 10th