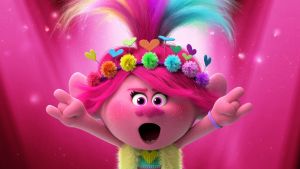 While many smaller independent films have wisely opted for a digital release into what is effectively a captive market, Trolls: World Tour is a landmark picture. Once intended as a worldwide cinema release, this is the first studio franchise movie to go straight to streaming. How it fares at the virtual box office will determine if other major films follow suit.

It’s a big deal. If only the sequel to the blindingly DayGlo 2016 hit was a little better.

We return to the kingdom of Queen Poppy (Kendrick), where, assisted by her chum (who wants to be more than a chum) Branch (Timberlake), she continues to belt out autotune karaoke covers. But what’s this? An invite from Rock Queen Barb (Bloom)?

It transpires that there are other kinds of music than tinny, reworded versions of Girls Just Wanna Have Fun. Out in undiscovered troll countries, funk, classical, techno, country and rock exist, each possessing their own divine string, as divvied up from a mystical ancient lyre. Other musical styles – funk, reggaeton, K-pop, yodelling – are cynically crammed into the mix without warranting a string of their own.

Determined to reunite the troll nations under a rock banner, Queen Barb sets about plundering the remnants of the lyre. Will the perky Poppy be able to stop her with hugs and glitter and empathy?

One of the great ironies underpinning Barb’s quest is that all the many tunes in Trolls: World Tour, sound exactly the same. Crazy Train and Barracuda have never felt so underpowered. Take out the warble and the slide guitar and Kelly Clarkson’s Grand Ol’ country showstopper Born to Die (co-written by Chris Stapleton and Justin Timberlake), and it could be reupholstered as dubstep.

The riotous use of colour and cuteness that powered the original film to $346.9 million at the box office, is successfully reheated and repackaged, but without anything as toe-tapping as Timberlake’s Oscar-nominated Can’t Stop the Feeling to sweeten the confection.

It is unclear what exactly the five credited screenwriters contributed to the project. The best half-joke is Jamie Dornan’s smooth jazz troll. Between the musical fantasias and unwanted medleys – Wannabe segues into Who Let the Dogs Out segues into Good Vibrations segues into Gangnam Style… yikes, make it stop – there’s not much that resembles a movie.

There are, however, plenty of hackneyed phrases (“this just got real”) and sermons about celebrating our differences.