The Hollywood great’s top films, from The Bad and the Beautiful to Spartacus

After three quarters of a century on the silver screen, Hollywood star Kirk Douglas has died aged 103. 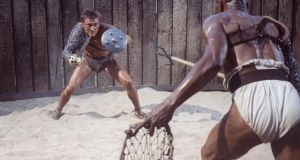 Like many actors of his generation, Kirk Douglas didn’t weather the social changes of the 1960s so well. Whereas today’s actors get high-profile leads deep into their 50s and 60s (just look at the Pitts, De Niros and Pacinos in this year’s Oscar nominations), Douglas and did all his best work in the 1950s and late 1940s. But what work…

Douglas got his first Oscar nomination as a ruthless boxer in this taut adaptation of a story by Ring Lardner. The picture gave the emerging actor the chance to show off his striking physicality. “Kirk Douglas is the boxer and he makes the character live,” Variety wrote in the muted praise of the day.

One of the great jazz films. Inspired by the life of Bix Beiderbecke, Curtiz’s picture presented a notably long-lived cast (not that anyone knew it at the time): Douglas, Doris Day and Lauren Bacall all lived deep into the next century. Day found Douglas a trial to work with. She wasn’t the only one.

Douglas was not a cuddly individual and he rarely played cuddly individuals. A key text on the American press, Wilder’s cynical classic casts Kirk as a journalist who – unusually for someone from that profession – will stop at nothing to get ahead. Bosley Crowther of the New York Times thought it “incredible” that any press man would behave so badly. Hmm?

Kirk Douglas:
A ife in pictures

THE BAD AND THE BEAUTIFUL (Vincente Minnelli, 1952)

Is there a pattern emerging here? Douglas plays a movie producer who shafts all his colleagues – writer Dick Powell, star Lana Turner, others – as he bullies his way to the top of the Hollywood pile. Fascinating structure. Great insights on the business. A favourite of Martin Scorsese.

Minnelli’s biopic of Vincent Van Gogh was very much An Event when it was released to the world, but, costing a then substantial $3,2 million, it struggled at the box office. Yet Douglas’s furious, eye-popping turn as the disturbed painter remains (for good or ill) the definitive interpretation.

Kubrick oscillated between rather faceless actors and stars who ripped the surface off the celluloid. Douglas was certainly among the latter. Here he plays a French officer who resists the unjust court-martialling of his men. This was the point at which Kubrick moved from director to legend. Features a famously complex tracking shot.

Yes, yes. You’re Spartacus. And so are you. The story behind the making of the film is as significant as the artefact itself. Sometimes it takes a person as awkward as Douglas to right systemic wrongs. It was he who announced that Dalton Trumbo, blacklisted by the McCarthyite thugocracy, was the true writer of the historical epic.

Terrific latter-day western featuring Kirk as an old-school cowboy on the run from laconic – and largely sympathetic – sheriff Walter Matthau. Brilliantly timed, the picture lamented the frontier values as the movie western was drifting out of fashion. Feels like an influence on the first Rambo film.

SEVEN DAYS IN MAY (John Frankenheimer, 1964)

Cineastes argue to this day about the virtues of De Palma’s characteristically energetic horror concerning telekinesis and extra-sensory perception, but it gave Douglas a hit at a time when the younger method boys were elbowing him aside. It remains a dizzying experience that profits from the largeness in which Kirk specialised. Seek out.