Patrick Schwarzenegger: ‘Dad didn’t tell me how to act’

Arnold Schwarzenegger’s son might be a chip off the old blockbuster, but he’s not wooden 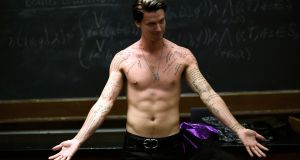 Patrick Schwarzenegger in Daniel Isn’t Real: ‘The first time I read the script I sat there thinking: what the heck is this?’

When one encounters a young, up-and-coming American star named Patrick, it’s customary to ask if there’s some Irish ancestry. In the case of Patrick Schwarzenegger, it’s not a case of some – it’s “plenty of Irish”, as he puts it.

The son of Maria Shriver, grandson of Eunice Kennedy Shriver, grand-nephew of US president John F Kennedy, US senators Robert F Kennedy and Ted Kennedy and the second cousin of representative Joe Kennedy III has, he notes, spent plenty of time in Ireland.

But, as a German speaker, he’s equally attached to his Mitteleuropean heritage. In common with his famous father – the Austrian-born bodybuilder, actor and former governor of California Arnold Schwarzenegger – Patrick holds dual Austrian-American citizenship.

“My dad is very proud of where he was born,” says Schwarzenegger the Younger. “He’s very proud of being from Austria and Europe. He came over here and he made his name and he loves America.

My dad made movies that he felt were enjoyable and fun. He wanted to bring pleasure to audiences

“But he also loves bringing us back to Austria with him and visiting his hometown. So I’m attached to Ireland. I’ve been there a lot and I love it. I can’t wait to get back there. But I’m also attached to Austria and America.”

Schwarzenegger was born and raised in Los Angeles, where, given his father’s profession, he spent a great deal of time on movie sets. He landed his first small movie role, aged 10, in the Adam Sandler comedy The Benchwarmers.

“I’ve been on movie sets for as long as I can remember,” says the 28-year-old. “I would sleep in the trailers. I remember Terminator 3 and Batman and Robin and End of Days and Collateral Damage and Around the World in 80 Days.

“Obviously, a lot of my dad’s films were made when I was extremely young or not even born yet. And I’m still visiting him at work. I visited him on The Last Stand and the last Terminator film.”

Father and son would bond by running lines together, although the screen veteran refrained from giving specific advice on, well, emoting.

“He gave me tons of points,” says Schwarzenegger. “But most of his advice comes back to working hard and making sure that when you wake up each and every day, that you want to do the thing that you’re working on. That’s really what it comes down to.

“My dad is very open about the fact that he’s not here to tell me ‘this is how you act’ or ‘this is how you cry on cue’. My dad made movies that he felt were enjoyable and fun. He wanted to bring pleasure to audiences, he wanted to become the biggest star in the world, so that he could get his message out there and do more charitable work. That was his whole reasoning. He’s the person that tells you to find your purpose and then you can figure out the other stuff.”

Positive Patrick started out as a joke. I do try to be positive. I’m not going to say that I always am

For all the residual glamour of his Hollywood upbringing (not to mention his father’s political career and his mother’s Emmy- and Peabody-winning journalism), growing up, Schwarzeneger and his siblings – he has two older sisters, Katherine and Christina, and a younger brother, Christopher – were largely kept out of the public eye.

“My parents are very private people,” he says. “My dad is still very private. He does a lot of stuff at his own house and he goes down to the gym. He’s not going out to nightclubs and parties. He was very adamant about us not being out in the public eye.

“It’s not that he minded about us being in public. It’s just that he was very disciplined growing up. As you can imagine, it was a strict household. And the same with my mom.

“So we were taught to have discipline. I’m extremely grateful for how they parented us because unfortunately you do see kids of celebrities go down rabbit holes. They can’t work out what they want to do in life. My dad was very insistent that we were going to work.”

In an interview with Flaunt magazine last year, he described the whiteboard he keeps next to his bed. It features daily goals separated into five columns: Family, Financial, Physical, Mental and Work.

He may not have had to pull himself up by his bootstraps as his father did, but he certainly has inherited the family work ethic. Aged eight, Patrick would run his charity booth at Arnold’s annual bodybuilding contest in Columbus, Ohio.

As a teenager, he signed a contract with LA Models and became the face of Hudson Jeans and Mango Man. He opened his first pizza restaurant in LA in 2014 and has subsequently expanded into other locations. He started his own clothing brand, called Project360, when he was just 15 and sold it off in 2014. His mother’s nickname for him is Positive Patrick.

“Positive Patrick started out as a joke,” he says. “I do try to be positive. I’m not going to say that I always am. But I try to see things in a positive light. That can be easier said than done. I have a lot of things I want to accomplish. It’s not about making a lot of money. It’s about doing what I enjoy.”

For the moment, acting is something he definitely enjoys. Over the past decade, he’s popped up as Romeo in Ariana Grande’s Right There music video, a frat boy in Grown Ups 2, a veteran of the 2004 siege of Sadr City in the miniseries The Long Road Home, and the romantic lead in dying-young drama Midnight Sun.

In recent months, he has completed work on Amy Poehler’s Moxie for Netflix and the science-fiction thriller Warning. Right now, he’s on promotional duties for the thrillingly dark psychological horror Daniel Isn’t Real, in which a troubled young man (Miles Robbins) reconnects with the psychopathic imaginary friend of his childhood (Patrick Schwarzenegger, in menacing form).

“The first time I read the script I sat there thinking: what the heck is this?” laughs Schwarzenegger. “This is a weird and crazy movie. But the more I read it, the more I got the sense that it was trying to do something a little deeper than the usual psychological horror film. It’s exploring issues and ideas relating to mental health. That’s when I started to really love the concept.”

“I didn’t know Miles until we met on the movie,” says Schwarzenegger. “I’m sure our families know each other. Hollywood is a small place at the end of the day. But from day one, I said I don’t really care who his parents are and I’m not judging anything about him based on who they are. And he was relieved.

“In interviews people have asked us: do you guys talk about your parents? I don’t think Miles asked me one thing about my parents. And I didn’t ask him. It’s not that I don’t care. It’s just that I’m not thinking: oh, he’s somebody’s son. I’m in a similar boat. I know how I want to be treated. I want to be myself.”

Daniel Isn’t Real is released February 7th, and on Blu-Ray and Digital on February 10th

Honey, I cast the kids: Hollywood’s generation next

They’re everywhere. You can’t take a backswing in the Hollywood Country Club without walloping a representative of the next generation. You might catch two with your five-iron if you were standing near the upcoming Daniel Isn’t Real: Miles Robbins, son of Tim Robbins and Susan Sarandon and – no further explanation is required – Patrick Schwarzenegger.

Come to think of it, Patrick is just finishing work on Warning opposite Alice Eve, apple of Trevor Eve’s eye, but she’s been around for a while. Miles’s half-sister Eva Amurri was great opposite mom in Mothers and Daughters. Scott Eastwood – again, no clues – was in Suicide Squad, Fast & Furious 8 and the last Pacific Rim movie.

All four of Meryl Streep’s children with Don Gummer have credits on the Internet Movie Database, the best-known of whom is probably Good Wife regular Mamie Gummer. A whole volume could be devoted to acting children of pop stars: Lily Collins (daughter to Phil), Eve Hewson (calls Bono “pop”), Zoe Kravitz (again, use your head).

Then there’s Sarah Sutherland. So good as the protagonist’s daughter in Veep, Sarah is the daughter of Kiefer. That makes her the granddaughter of Donald. Soon there will be nothing but dynasties from LA County to the Atlantic.