Review: Birds of Prey (And the Fantabulous Emancipation of One Harley Quinn) 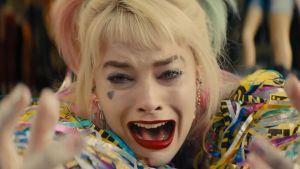 Film Title: Birds of Prey (and the Fantabulous Emancipation of One Harley Quinn)

If you found yourself internally screaming for Ryan Reynolds to shut the hell up during Deadpool, then the relentless, zany narration of Margot Robbie’s Harley Quinn will likely send you gibbering and ruined towards the emergency exit after, oh, 23 seconds.

On paper, Birds of Prey looks like a coup for Margot Robbie. Her 2015 pitch for R-rated girl gang film including Harley is not a bad idea, as it extricates the popular Halloween costume out of the unlovely Suicide Squad.

As it happens, Robbie was ahead of her time: Birds of Prey is the the second DC Films production with an R rating: the first was Joker, and that seemed to work out rather well. The Australian star and producer has, additionally, assembled a crack team: the Chinese-American director Cathy Yan, who won a Special Jury prize at Sundance in 2018 with her Jia Zhangke-produced debut feature, Dead Pigs; and Christina Hodson, the Chinese-English screenwriter of Bumblebee.

If only Margot Robbie’s incessant winks at the audience and exhausting meta-voiceover would pause long enough for, well, a movie to occur. An onslaught of backstories related with graphics and emojis in Harley’s grating Brooklyn babydoll brogue curdle into some nonsense concerning a diamond and (ugh) campy, psychopathic mobsters (Ewan McGregor and Chris Messina). Think hideous hyperactive music video.

Birds of Prey has pretensions toward, sigh, Girl Power. Sadly, the film confuses feminism with disgruntled comic molls and fighting with lithe, acrobatic knicker shots. It teeters unsteadily between ultraviolence – including actual face-flaying – and inappropriately cartoonish antics. Ha! That’s guy’s beard is on fire! Ha! That terrified woman is being made to strip and dance on a table!

Harley Quinn herself is an utterly disingenuous creation. Murders and mayhem happen around her, but no matter how many heads she knocks together or legs she breaks, she still prefers beanbags and glitter-bombs to actual weaponry.

Mary Elizabeth Winstead struggles with the underwritten Huntress. Several absurdities are written off as jokes: Rosie Perez’s character, we’re told, talks like a 1980s cop show: cue lazy 1980s cop-show dialogue. Harley somehow changes into rollerskates during the climactic showdown, prompting the question: how did she do that?

Not feeling that emancipation, ladies.

Elisabeth Moss: ‘I don’t care what it is as long as it’s good’
Real news has value SUBSCRIBE