Underwater: Nothing to see here – literally – in this murky, appalling mess 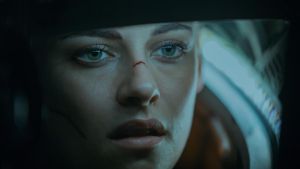 Shoulda gone to SpecSavers: Kristen Stewart peers into the abyss in Underwater

Okay, it transpires that this appalling rip-off of those other underwater rip-offs of Alien (Leviathan, The Abyss and so on) wasn’t exactly inexpensive. It takes more than $50 million to persuade Kristen Stewart, Vincent Cassel and others into a creature-invested simulacrum of the Mariana Trench.

But, by God, it’s murky. Elderly viewers may wonder if the cataracts have kicked in again. Every scene is washed with charcoal shadows of eternal doom. I’m taking the good people at Fox’s word that Stewart and Cassel are among those battling blood-sucking aqua-lizards. On the evidence of eyes alone, it could just as easily be Miriam Margolyes and SpongeBob SquarePants.

Anyway, if Underwater does have any useful purpose (and it probably doesn’t) it is to confirm that Mainstream Kristen Stewart is now a menace to compare with mainstream Julianne Moore. The cases are different, of course. Stewart came to fame via a blockbuster and then sidestepped into arthouse cinemas. Moore was always at the high table. But both have, over several missteps – Charlie’s Angels being Kristen’s most recent – confirmed that they are better sticking with Frenchies and Brooklynites.

Nobody is that moved, as the film is too bleeding dark for us to distinguish one actor from another

This suspiciously short (cut to the bone?) farrago concerns a bunch of scientists coping with linked disasters in a sea-floor drilling facility. Their first issue is a shuddering that tears the structure to pieces. Their second involves things that might be spiny and might be slippery, but are certainly too ill-lit to generate much audience unease.

Within minutes of the crises landing, at least one operative has been dispatched to Davy Jones’s locker. “He’s gone, Norah,” someone says sadly to Stewart (that’s her character’s name, apparently). Someone else dabs a tear. Nobody watching is that moved, as the film moves too quickly to allow character development and is too bleeding dark for us to distinguish one actor from another. Sorry to lose you, Chuck or Dave or Barry, whoever you were.

It doggy-paddles along for another hour without doing anything to relieve levels of maritime tedium rarely encountered away from clogged off-ramps on the Holyhead ferry. You’ll end up trying anything to stay awake. You might even end up composing alternative lyrics for the 1971 Middle of the Road hit (which was what I was doing earlier, in case you were wondering).