Has the Blues Brother left a comic legacy or just a template for living fast and dying young? 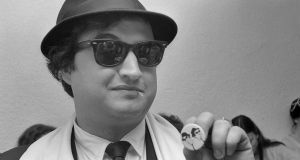 Can you disentangle the life of John Belushi from his tragic death? Has he left a comic legacy or just a template for living fast and dying young? On the one hand he spearheaded the pioneering American comedy show Saturday Night Live, still running 45 years later, becoming its first breakout star with the smash-hit movies Animal House and The Blues Brothers. The poster for the latter has been a fixture on teenagers’ bedroom walls ever since. But is that down to Belushi’s comedy or because he was dead within two years of the film’s release, a victim of drug addiction and the pressures of extreme success?

Today sees the release of a documentary, Belushi, made by the team behind the Emmy-nominated Brando documentary Listen to Me, Marlon. It’s the first telling of Belushi’s story, says his widow, Judy Belushi Pisano, to apportion “even-handed” attention to her husband’s life and death. Pisano has always regretted how Bob Woodward’s 1984 book Wired, a fix-by-fix account of the star’s gruesome decline, came to define her husband’s memory. “Had John died in his sleep,” she says by phone, “we would view his life much differently. We really would.”

What distinguishes the new doc, says his widow, is that it doesn’t assume that Belushi was destined for self-destruction

The documentary uses animation by Robert Valley, maker of the Gorillaz videos, as well as home videos and oral testimony to trace the star’s journey from Wheaton, Illinois, via the Second City comedy/improv club in Chicago, to national prominence – first with the National Lampoon Radio Hour (which Belushi directed as well as performed in), then SNL. It took the producer John Battsek 10 years to secure Pisano’s approval for the film, during which time a biopic of the star has languished in development gridlock, with Joaquin Phoenix and the Once Upon a Time in Hollywood star Emile Hirsch in the running for title role.

What distinguishes the new doc, says Pisano, is that it doesn’t assume that Belushi was destined for self-destruction. “I know how John worked through things,” she says, “and I don’t see any reason why he couldn’t have worked through this problem, just as others have.”

What does Battsek think marks the film out? “What’s powerful about it,” he says via Zoom, “is that it’s a beautiful love story.” Alongside the personal photos and newspaper clippings, the film features scores of adoring letters over many years from John to Judy. They do indeed offer a corrective to the idea of Belushi as one of the “wild and crazy guys” (the title of a book on his generation of Saturday Night Live comics). You do wonder, however, whether publishing his most intimate correspondence is the best way to memorialise a man hounded to death by the penetrating gaze of fame.

“You make a good point,” says Battsek. “But Judy wanting that aspect of their lives to be revealed was enough for us to feel that was the right path to go down.” The result is a touching documentary about a sensitive, self-interrogating man, clinging to his wife like a rock, all too aware that his drug battle might be a fight to the death. The film also brings Belushi’s background into focus, as the ambivalent son of Albanian immigrants, chasing his own American dream, and as a figure in whom the era’s political and cultural energies crystallised. “He was definitely countercultural,” says Pisano. “He was a radical. His comedy was a part of the whole shift from the post-second World War generation to the next.”

“He was,” says the film’s director, RJ Cutler, “the revolutionary spirit of the times.” And he was the first, arguably, to bring that iconoclastic energy into comedy. Cutler, like Battsek, grew up idolising Belushi: the film is a fanboys’ tribute to a comic with whom they strongly identified as teenagers. “When I saw him on Saturday Night Live,” says Cutler, “he was someone you just wanted to know more about. You wanted to be part of it, whatever it was. He was you up there, in a way.”

“He was the underdog,” says Battsek, “and we all loved that about him. He wasn’t conforming in any way – not in the way he looked, the way he behaved, not in the nature of his humour.” The documentary contrasts Belushi’s “blue-collar” style with that of his SNL costars Chevy Case and Christopher Guest – private school and patrician versus Belushi’s more primal comic energies.

The excess of his comedy is much remarked on: “He went from zero to 100 so quickly,” says Pisano, “and that surprised people.” Battsek cites the Saturday Night Live sketch in which Belushi destroys the set while listening to Wagner’s Ride of the Valkyries. Knowing what became of Belushi, you might ascribe this shtick to an out-of-control personality alone. But Pisano claims otherwise. “It’s like throwing a baseball,” she says. “You throw it 1,000 times to get control of it, then your muscle memory, your skill and your mind work together from that point onwards. It’s the same with comedy: John was very knowledgeable about what he was doing – but went into sheer instinct while he did it.”

The film leaves you in no doubt that Belushi continues to be, as Cutler puts it, “a very meaningful artist in the lives of those who experienced his work”. It has less to say on Belushi’s legacy to modern comedy. Fair enough, perhaps – as his widow, Judy, points out, he wanted to be an actor, and comedy was just how he chose to get there. But he also lit up Second City, National Lampoon and Saturday Night Live, American comedy institutions all, and starred in what was then the highest-grossing comedy movie ever, Animal House. Has that short but stellar career left a mark?

To Battsek, the answer is a clear yes. The film’s US premiere, he points out, was hosted by Judd Apatow. Belushi is voiced in the film by the Saturday Night Live alumnus and Belushi fan Bill Hader. “The Seth Rogens of this world,” he says, “would all say they are deeply influenced by John.” To Cutler, Belushi didn’t just influence comedy: “He invented performance art a full decade before it bubbled up in the East Village. I mean, what was the Blues Brothers? Is it music? Is it performance? Are they playing characters?”

In that hard-to-pin-down hybrid of fact and fiction (albeit easier to pin down than, say, Belushi’s Saturday Night Live team-mate Andy Kaufman’s wrestling antics over the same period), Cutler traces the roots of post-truth modernity. “The lines are so blurry. And now we’re living that! We’ve got a fictional character in the White House. John presaged the culture we all live in.”

On this side of the Atlantic, Belushi and his generation’s legacy was first encountered via the movies. “They’re the people,” says the British comic Matthew Highton, “through whom a lot of comics first understood that they love what funny is.” To those who then dug deeper into Belushi’s Saturday Night Live work, his significance is in that “rolling with it” and element of risk. “In live comedy, you see that all the time,” says Highton. “That chaotic energy and spirit of, ‘If we fail, it’s fine.‘ But to see someone in such a big medium playing around in the moment and finding what’s funny, that’s really exciting.”

“The thing I love most about comedy,” he goes on, “is when you see people on stage together and they don’t fully know what the other person is going to do. That’s what you got with Belushi, and I don’t think that would have been seen before, certainly not in the mainstream.”

The comic Nick Helm, who had a huge poster of Belushi in his old flat, agrees: “You had this well-rounded cast [on Saturday Night Live], and then you had this one guy who cut through everyone, and that was Belushi. Like Animal from The Muppets, he was everyone’s favourite.” But he’s not sure Belushi’s work endures. “He introduced [the idea of] funny people not just as rock stars but gods,” says Helm. “They owned New York, basically. And I think that the funniness of it maybe came second to the lifestyle.” Helm is a devotee of one of Belushi’s disciples, Chris Farley (who also died of a drug overdose at 33). “Farley is instinctive, and Belushi is more thought-out. I think he’s trying to be cool. And I don’t really see a place for being cool in comedy.”

But does that just bring us full circle, to the point where the “live fast, die young” legend rears up and consumes the man? Helm says: “It’s hard to watch those SNL sketches and not smell the alcohol and drugs. They just smell of excess.” But to others, that’s the iconoclastic fervour of “a man on a mission” to up-end the status quo, as his widow describes him. Tonight’s documentary gives us a clearer sight than ever of the man behind the myth but leaves us no nearer to untangling his comedy from the compulsions that destroyed him. – Guardian

Belushi is on Sky Documentaries and Now TV at 9pm today