Collective: A woeful tale and a non-stop thriller documentary 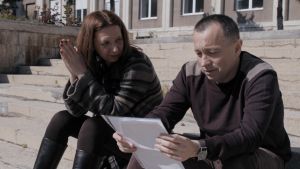 Director Nanau and his crew shot footage for 14 months

An astonishing, urgent documentary portrait of investigative journalism – and a timely reminder that cronyism isn’t a victimless crime – Collective concerns a fast- breaking news story, systemic corruption, government spin, and a sad retreat to the certainties of established, if rotten, political parties. A scripted drama couldn’t make it up.

Director Alexander Nanau and his crew shot footage for 14 months and spent longer again in the editing suite to craft a non-stop thriller from a woeful tale of diluted disinfectant, which begins with a 2015 fire in the Bucharest nightclub Collectiv. (The surviving footage is, like several sequences, not for the faint-hearted.) That  tragedy left 27 young rock fans dead and more than 100 injured.

The club was operating with inadequate fire exits.

In the weeks that followed, 37 more died, some from only minor burns, due to hospital bacteria and shoddy medical facilities. Grieving parents hold press conferences as editor Catalin Tolontan, a tenacious journalist writing for the sports newspaper Gazeta Sporturilor, challenges the health minister, Nicolae Banicioiu, and in particular his claim that Romanian burn facilities are as good as those found in Germany.

Thanks to some dodgy medical contracts, it transpires that the disinfectant used throughout Romania is diluted beyond any usefulness. Medical professionals turned informants – as exemplified by the brave Dr Camelia Roiu – reveal conditions in which burn victims are crawling with maggots and covered with sheets so that staff don’t have to look at them.

Protests and the suspicious suicide of Dan Condrea, the owner of Hexi Pharma, who supplied the products, force the Social Democrats government to make way for an interim administration of experts. The new health minister, Vlad Voiculescu, is a patients’ rights advocate who is passionate about transparency, thereby allowing director Nanau extraordinary access into meetings that reveal the extent of the rot.

Nanau never loses sight of the tragedy behind the headlines. Collectiv survivor Tedy Ursuleanu, who is photographed with her scars and lost hand as part of an exhibition, causes one parent to sadly exclaim that his dead son was not as badly burned.

Sadly, what ought to be a rousing tale of uncompromised journalistic and medical practice comes to an end that is as disconcerting as the final scene of any of Alan J Pakula’s 1970s conspiracy dramas. Essential viewing for anyone with an interest in checks and balances.