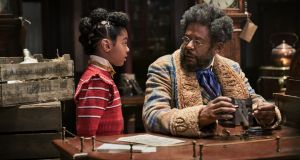 The Christmas film is a surprisingly durable thing. As long as there’s a happy ending, preferably decked with yuletide trappings, then this merry genre is elastic enough to encompass the world-weariness of It’s a Wonderful Life, the anarchy of Gremlins and the international criminal capering of Die Hard. (It’s a Christmas movie – get over it.)

The director, novelist and playwright David E Talbert is perhaps better known for his 30 years in theatre than for the five feature films he has directed since 2006’s First Sunday, starring Ice Cube and Tracy Morgan. Talbert can’t say for certain how it came to pass that no fewer than three of those films are Christmas movies.

“It’s an accident,” he promises. “It has a spirit that I connect with unconsciously, I think. When I was growing up all my family were pastors and preachers. And there’s no better theatre than black church. Sitting in the front row you feel the spirit, you feel that lives are being changed. They are changed through the power of words. And the power and possibility of that is infused in the new film.”

“Hamilton was a groundbreaking, barrier-breaking cultural phenomenon,” says Talbert. “I’ve seen that musical so many times. Just to be able to put different faces and bodies in a musical. Just to see a person of colour as George Washington. That began a wave of reimagining. I was certainly inspired by that. It was bold. So Jingle Jangle is bold. And its look and feel and the characters and the world were absolutely inspired by Hamilton.”

Jingle Jangle is the latest starry, big-budget offering from Netflix. But the streaming giant has long been a one-stop shop for seasonal fare. Released in 2017, A Christmas Prince, a Netflix joint in which an aspiring journalist falls for the playboy prince of the fictional country of Aldovia, is the current jewel in the platform’s Christmas crown, spawning two sequels (thus far) and a devoted following. For three years fans have flocked to Peles Castle – the Romanian castle where A Christmas Prince was shot – in the Carpathian Mountains. Diehards have giddily pondered the similarities between the franchise’s heroine and Meghan, the Duchess of Sussex. (They were both married in 2018. And they both had royal babies in 2019.)

Less than a month after the original film debuted, the official Twitter account sent out a tweet noting certain subscribers’ viewing habits: “To the 53 people who’ve watched A Christmas Prince every day for the past 18 days: Who hurt you?”

“Every day?” asks Keegan-Michael Key, one of the stars of Jingle Jangle.”I know that’s not a million people. But 53 people is a lot of people to dedicate themselves like that. Wow. Do people know about this?”

Despite its origins, Jingle Jangle couldn’t be less like the defiantly cheesy A Christmas Prince or its two prophetic sequels (A Christmas Prince: The Royal Wedding and A Christmas Prince: The Royal Baby). “I think that we might very well be dealing with something revolutionary,” says Key. “Because Christmas movies are an extremely white genre. And when you see colour being represented in these movies, it straightaway lets someone know that we can make more of these. There are black Christmas films. Which is a sub-sub-genre. Those films are being made for a black audience. This movie has been made for everyone.

“What I find exciting about it is that David chose to make a period piece. It’s Victorian. It’s Dickensian. It exists in a world that we all see as particularly Anglo and particularly white. And when you put those faces of colour and those bodies of colour in there, it’s exciting.

“It’s not just a Christmas movie with black people. It’s a period Christmas movie that is set in the British Isles. The whitest place on earth. Bar places like Brixton or Blackfriars. And I certainly know there’s plenty of black people in Dublin and Belfast. But David has brought these two cultures together in a way that’s really quite brilliant. It allows young people of colour to see themselves on screen. And it’s important to see that you are represented. If you grow up in a home and your parents and your uncles are all plumbers, there’s a good chance you are going to be a plumber. If you grow up and you are exposed to many professions and locations, you understand that you have choices.”

“There have been some Christmas movies with people of colour, with black people,” adds Forest Whitaker, who previously headlined Kasi Lemmon’s Black Nativity. “But no one has made a black Christmas movie with this kind of scope and magnitude before. You get a chance to see yourself on screen in this elevated way in this magical mystery world. As a kid I’d watch all those classic films – Willy Wonka or Doctor Doolittle – that created these magical, whimsical worlds that we weren’t allowed into. They were part of that universe and we were part of this one. This movie allows us to be in both those universes. And that’s a credit to David’s imagination and what’s happening in the world right now.”

Seven of the eight musical numbers were penned by Grammy nominee David Nathan and hitmaker Philip Lawrence; the latter has written songs for Bruno Mars, Beyoncé and Adele. A final showstopper was added by Jingle Jangle’s producer, John Legend.

“The production designer gave me a book of all the things that my character had already invented,” says Whitaker. “It was a really thick book of toys. And then I started watching the team make all of the toys and getting it into my mind that they were mine. So there were a lot of physical elements that were really there for me.”

When Jeronicus’s greatest creation – a puppet who turns puppetmaster, as voiced by Ricky Martin – and all of his patents are stolen by his apprentice (Emmy winner Keegan-Michael Key), the inventor becomes deeply depressed. It falls to his granddaughter Journey (Madalen Mills) to pull him out of his funk and to inspire him to start inventing again. All the while the team must dodge the nefarious interventions of Ricky Martin’s tinman dictator.

“There are lots of dictators in America so it’s an easy to go to,” jokes the Puerto Rican singer (a former Republican Party supporter who has recently turned out for the Joe Biden campaign). “My main support in this project was the director David Talbert. He was constantly pushing me, poking me to see if I will come up with something more exciting. It was so much fun being the bad guy. You can do things that you never thought you would do in person and you can get away with it. And in such a beautiful, important project. I feel full of gratitude to be part of the first original Netflix musical action musical. Hopefully this will be the first of many.”

Working with his producing partner and wife, Lyn Sisson-Talbert, David Talbert began working on Jingle Jangle more than 20 years ago. With a nod to existing black musicals Dreamgirls and The Wiz, the project was initially conceived for the stage. The birth of Talbert’s son Elias, now aged eight, and one particular Marvel superhero inspired a change of direction.

“Growing up, my favourite Christmas films were Charlie Brown’s Christmas and The Grinch that Stole Christmas.” recalls Talbert. “It never seemed jarring that you didn’t see anyone that looked like you in those worlds until I sat down with my son to watch those movies. I noticed that he wasn’t connecting because he just got out of seeing Miles Morales in Spider-Man: Into the Spider-Verse. So I knew this was time to bring this world to life not only for my son, but for everybody.”

Jingle Jangle: A Christmas Journey is on Netflix from November 13

Yungblud: ‘My generation is over being divided’
9