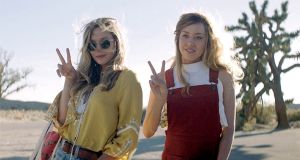 In television-land, the “sadcom” likely peaked sometime between Phoebe Waller-Bridge sobbing through the denouement of Fleabag and Sarah Lynn’s visit to the planetarium in season three of BoJack Horseman.

The film world, however, has been a little slow to catch up with the gallows arcs and downer endings of such voguish delights as Rick and Morty.

A case in point is the final scene in new film Ingrid Goes West. Is it a spoiler to scratch one’s head and ask: is that a happy ending? Is it super sunny or really dark? Or maybe both?

Spicer had never heard the term sadcom while he was developing the screenplay with co-writer David Branson Smith. But since Ingrid Goes West premiered at Sundance – where it won the Waldo Salt Screenwriting Award – Spicer has heard it enough to know that he’s happy to go with the compound term.

“I’ve always appreciated comedy that’s coming from a place of pain. The original British version of The Office is a huge touchstone for me. And I grew up watching a lot of British comedy and wanting to emulate that tone. It’s exciting for me to know that there’s a trend toward more intelligent and less broad, joke-based comedy, that’s coming from a really human place.”

Spicer is equally sporting to hear Ingrid Goes West described as the “Instagram movie”, a handle that’s proving popular when we meet, hours after the film takes a hotly-ticketed London Film Festival bow.

“People called The Social Network the ‘Facebook movie’, but it was a lot deeper than that might have suggested,” says Spicer. “I’ve seen people’s eyes light up when you say our movie is Single White Female with Instagram. And hey, whatever gets people watching is fine by me.”

With its Generation Y tongue firmly in cheek, Ingrid Goes West stars Aubrey Plaza as the titular unhinged millennial, who chases her distempered dream: she heads to Los Angeles, where she hopes to befriend her favourite social influencer, Taylor (Elizabeth Olsen), whose postings include the likes of: “A couple that yogas together stays together #perfect.”

Soon enough, they’re performing karaoke versions K-Ci & JoJo’s All My Life together, and using the highest hyperbole to describe each other and their relationship: “You’re so funny. I love you so much. You’re amazing” and “You are by far the coolest, the most interesting person I’ve ever met”.

I definitely didn’t want to climb on to a soapbox [about social media]. But I did want to present the negative side of it if you’re coming to it from a place of insecurity. It can be damaging to your psyche

Misquotations and mistranslations are rife. See Taylor’s “Live in the sunshine, swim in the sea, drink the wild air,” a mantra she attributes to Ralph Waldo Emerson.

“Pretty much all the captions and hashtags were real,” says Spicer. “We just stole and curated the best of them.”

In this spirit, a copy of Joan Didion’s The White Album makes several guest appearances only to meet a most unsanitary end. “The Joan Didion thing comes from seeing all these people quoting her completely out of context,” says Spicer. “Joan Didion was always critical of LA and LA culture. And yet I kept seeing her quotes being used in this super-positive, rosy way that completely misses the point. That Ralph Waldo Emerson quote; that guy was real, too. It made me laugh.”

Spicer, whose sister is a YouTuber, was keen not to get too preachy about the ills of social media. “I definitely didn’t want to climb on to a soapbox. But I did want to present the negative side of it if you’re coming to it from a place of insecurity. It can be damaging to your psyche. But that doesn’t mean the entire culture is bad. And we are satirising ourselves, a little bit. This is the lingua franca that we and our friends use. I still like avocado toast.”

Ingrid Goes West proves a terrific showcase for Plaza, who also produced the film. She’s not working in a vacuum. Olsen, too, is super. Wyatt Russell (son of Kurt Russell and Goldie Hawn) is wonderful as Taylor’s artist boyfriend who likes to let his work “speak for itself”. Hence, each of his pieces is emblazoned with hashtags such as #squadgoals. O’Shea Jackson jnr, who plays Ingrid’s Batman-obsessed love interest, steals every scene he appears in.

“I wish I knew how I got my cast,” says the debuting director. “It’s kind of a boring story. Because it’s one of those stories where everyone gets whatever they want and those stories are always boring. We had finished writing the script and made a list. ‘Here are the top people I’d like to make this movie.’ And I sent them the script and they all said ‘yes’ . . . O’Shea, who had just finished Straight Outta Compton, really is obsessed with Batman. He used to joke that we were making a documentary about his life, ” says Spicer laughing.

“And then we started making the movie and everything that could go wrong, did go wrong. On any film shoot there are challenges, but multiple people came up to me towards the end of production saying things like: ‘I’ve worked on 40 movies and I’ve never seen anything like this.’ There was a wildfire in Santa Clarita and we had to evacuate the set. It was crazy scary to see this giant fire suddenly coming towards you. So we lost a day shooting. Then I walked through a plate-glass window. And then we were shooting at Joshua Tree [National Park] and it was 110 degrees and people were fainting and suffering from heat sickness. Every day there was a new thing,” he says.

“My strategy was to be really nice to everybody and to learn everybody’s name, and to not be afraid to ask the more experienced people for help. That way, when I inevitably f**k up, they’ll say: well, at least he’s a nice guy.”

Unfriended (Levan Gabriadze, 2014)
Terrific Blumhouse joint in which high-school students in a Skype conversation are haunted by a student who was bullied and committed suicide.

The Social Network (David Fincher, 2010)
A not entirely flattering portrait of Harvard student Mark Zuckerberg (Jesse Eisenberg) and the creation of the social networking site that would become Facebook.