Going out or staying in? The best shows, exhibitions and TV to see this weekend

City of London Sinfonia at the NCH, ‘This Beach’ revived from Fringe, BBC’s ‘Howards End’ 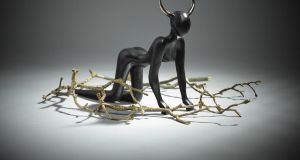 This Beach works like a dry parable for the refugee crisis, but it contains a simmering rage.

It’s rather unusual for a visiting orchestra in the National Concert Hall’s International Concert Series to feature an Irish soloist. Belfast pianist Michael McHale has a long-standing musical partnership with clarinettist and conductor Michael Collins and he features as the soloist in Schumann’s Piano Concerto in Collins’s concert with the City of London Sinfonia. The other works on the programme are also established 19th-century favourites, Mendelssohn’s Hebrides Overture and Brahms’s Second Symphony. Collins also conducts the orchestras Crash, Bang, Wallop concert at 12.30pm on Sunday, a children’s concert with crafts and other fun activities in the NCH foyer from 11.30am.
Michael Dervan

In a good play everyone is right, wrote the 19th-century dramatist Freidrich Hebbel. But in a Brokentalkers play (two words rarely put together) people can be plain wrong. An acerbic satire revived from its last outing at the 2016 Dublin Fringe Festival, given an amusingly flat delivery on Sabine Dargent’s pleasingly artificial set, This Beach by writer/directors Gary Keegan and Feidlim Cannon, works like a dry parable for the refugee crisis, but it contains a simmering rage. On a private beach, one alarmingly bronzed family try to ignore the bodies that periodically wash ashore. During a wedding, though, one body draws breath, and they keep him around long enough to amplify their hypocrisies – the posturing paterfamilias; an ultra-defensive military man; a hand-wringing ethical consumer. None is more skewered, though, than a gawping artist/documentarian. That might seem like a bitter self-portrait, but the performance really faces outwards, towards an audience aware of calamities but who are content to coast.
Peter Crawley

Radical Love # Female Lust Group show, Gallery X, 65 William St, Dublin 2, Until November 26th, galleryx.ie
In a touring exhibition initiated by Róisín O’Loughlin (and previously seen at the Crypt Gallery in London and the Women of the World Festival), 46 female artists respond to poems by Arabic women poets of 1,000 years ago, assembled in a Yale University Press volume, Radical Love. The poetry “challenges preconceptions of faith, of class, of the female experience long ago; they capture what it is to relish life and living”. The poems quoted come across as remarkably contemporary and immediate. They, and the artworks, are more nuanced in their concerns than the Female Lust subtitle might suggest.
Aidan Dunne

EM Forster’s much-loved story, Howards End (Sunday, BBC One, 9pm) has been made into a series – well, the BBC costume department can’t be left to gather dust. There’ll be no end of finery on show in this drama of social mores and manners, as sisters Margaret and Helen Schlegel negotiate the tricky terrain of etiquette and decorum in early 20th-century England. Don’t expect many steamy sex scenes, but there’ll be no shortage of frissons and meaningful looks over china tea cups.
Kevin Courtney