Only the Brave review: Firefighters eventually bring the heat

Josh Brolin and Jeff Bridges smoulder in a sweaty, macho arm-wrestle of a story 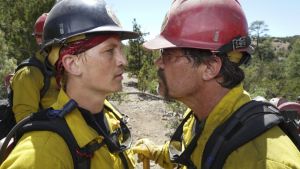 Josh Brolin and Miles Teller in Only the Brave. The film gets by well enough as a latter-day Hawksian tale of men at work and the women who love them.

Film Title: Only the Brave

“It’s not what stands in front of you it’s who stands beside you.” So runs the breathless tagline of this sweaty arm-wrestle of a film. Based on the true story of a fire crew from Arizona, Only the Brave begins with a fiery bear running angrily towards the camera. That gives some idea “who stands beside you”. Men macho enough to challenge a bear that’s on fire. That’s who.

Rough-hewn middle-aged fellows such as Josh Brolin and rougher hewn old fellows such as Jeff Bridges lead smoother hewn fellows such as Miles Teller and Taylor Kitsch. If you’ve any doubt about Bridges’s rough credentials then be aware that he actually plays in a band called The Rusty Pistols. Never mind the fiery bears. These guys look capable of defeating exploding sharks or tigers with machine guns.

All (or most) joking aside, Only the Brave – which really does honour courageous professionals – gets by well enough as a latter-day Hawksian tale of men at work and the women who love them. The opening sections detail the crew’s attempt to progress beyond the “Type 2” category and achieve “hot shot” status.

You won’t need to be told that, while receiving his final assessment in a dangerous forest fire, Chief Brolin ignores the conservative advice of a crusty senior and goes with his gut. Convinced he’s blown his chance, he smashes up a chair in the office. But the senior fire people recognise his innovation and promote the team.

It would be nice to say they go on to fight an enormous number of fires. But Only the Brave spends most of its time fleshing out back-stories. Rookie Teller recovers from a drug problem and mends bridges with enemy Kitsch. Brolin’s equally tough wife, played by an underused Jennifer Connelly, takes care of misused horses. Is that Andie MacDowell pouring coffee over Bridges’s shoulder? It is.

The ultimate impression is of a less jokey, fire-based version of John Milius’s great surfing epic Big Wednesday. We are all biding macho time until the big one comes around. It eventually does arrive and the results are properly bone-shaking. Tougher than the rest.