Homeless children growing up in poverty just outside Disneyland

The Florida Project is Sean Baker's acclaimed new film, a comedy about children living in budget motels in the shadow of Disney World 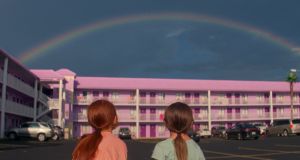 Sean Baker’s The Florida Project set in the shadows of Orlando’s Disney World, where the hotels that once catered to budget-minded tourists are filled with homeless welfare families

It’s a balmy May night on the French Riviera and more than 1,000 people are snaked around the streets of Cannes hoping to get in the most buzzed-about title of the festival. This is not the first screening or the first unwieldy queue for Sean Baker’s The Florida Project. Elsewhere on the Croisette, Moonlight distributor A24 is busy snapping up the film. The reviews from earlier oversubscribed screenings are ecstatic.

Months later, on the eve of the similarly hot-ticketed London premiere, Sean Baker is finally catching up with the hype around Sean Baker: “It was very nice to have that but very hard to notice in the moment,” he says. “We were stressed out trying to sell the film and stressed out by the premiere. We didn’t know what was going to happen.”

Two years ago, Sean Baker made quite a splash with Tangerine, a lively transsexual comic melodrama shot entirely on iPhones. “Tangerine didn’t blow up,” he says. “But a lot of people thought it was my debut. They hadn’t heard of my other films. So it blew up enough to allow me to get financing for this film. And that wasn’t there before.”

The Florida Project is Baker’s version of The Little Rascals, a child-centric project set in the shadows of Orlando’s Disney World, where the hotels that once catered to budget-minded tourists are now utilised by homeless welfare families. The Magic Castle, an eye-poppingly purple structure presided over by an avuncular Willem Dafoe, is such a place: “a gypsy project”, as one character puts it. But for adventurous six-year-old Moonee (Brooklynn Prince) and her sweary, boisterous peers, it’s an aptly titled wonderland. “The man who lives in here gets arrested a lot,” she says, as she leads her chums on a guided tour. “The woman in here thinks she’s married to Jesus.”

“Brooklynn came in and blew us away,” says Baker of his tiny leading lady. “She had the wit. She had the energy. She had the cuteness. We would give her scenarios and every time shed make us laugh. So we were very impressed with how smart she was and how quick she could ad-lib or adapt to direction. But it was only when we got into production we realised that she could hit emotional heights without breaks or editing. I didn’t even know or understand how good she was. She’s one of those people like Mickey Rooney or Jodie Foster that are just born to do this.”

The children grow up in budget motels, right outside the happiest place on earth for children. That juxtaposition drew me in

As with Henry James’s What Maisie Knew, Moonee’s madcap adventures – telling sob stories at the ice cream parlour, roaming around ghost estates – mask the desperate situation that she and her similarly livewire mom Halley (Bria Vinaite) are experiencing. This hidden homelessness struck Chris Bergoch, Baker’s regular co-writer, while visiting his mother in Florida in 2010.

“And then I started reading about it,” recalls Baker. “These people are technically homeless because their families can’t afford housing. So the children grow up in budget motels, right outside the happiest place on earth for children. That juxtaposition drew me in. Visually, too, everything around the strip where this is set – the colours, the shapes – is a riff on Disneyland.”

To date, Baker’s films have concerned the marginalised and disenfranchised. Take Out (2004) follows an illegal Chinese immigrant working as a deliveryman to pay off traffickers. The protagonist of Prince of Broadway (2008) is a New York street hustler. Starlet (2012) chronicles an unlikely friendship between a cranky old lady and an unemployed actress.

The day-glo, tourist-signalling environment is unlikely to remind anyone of Kes or Scum. Yet Baker cites Alan Clark and Ken Loach among his primary influences. Is he, like those directors, making a political statement with The Florida Project?

Some people come up and say: Halley is the best mom ever; I wish my mom had given me the same love. Other people scream for child protection services to show up

“I do feel they’re political,” says the director. “I mean, like Clark I’m trying to make the political digestible for mainstream audiences. Cinema is primarily an entertainment medium. People are paying money on a Friday and a Saturday night. And I think they want escapism, especially in this day and age when we’re inundated with so much politics and bad news and natural disasters and tragedies. So if I want to make a political film, it has to be entertaining. It has to fit with a genre. In this case that’s comedy. That’s why I decided to make it primarily focusing on the comedic adventures of the kids. So there are no heavy-handed aspects or statistics or preaching. But after you’ve seen it, it sparks debate.”

That is something of an understatement. Halley’s casual parenting style has generated furious discussion outside screenings and online. Some critics have been horrified by the rambunctious Halley’s anti-lawnmower mothering. “[She] is so without resources that she doesn’t even realise what a bad mother she is,” writes Caryn James for BBC Culture. “She lets her preschool-age daughter, Moonee, run free all day, while she herself sprawls on her bed slurping sodas and watching daytime TV,” notes Richard Brody in the New Yorker.

“In a weird way, the film is like a sociological study,” says Baker. “Just to see the different ways that people react to the Halley character. They have really extreme reactions. I understand both sides 100 per cent. Some people come up and say: Halley is the best mom ever; I wish my mom had given me the same love. Other people scream for child protection services to show up. My focus was always on empathy. I just hope that audiences can take a moment to walk in her shoes and try to understand where she is coming from. She probably had Moonee when she was 15 years old. There’s no parental support, no formal education, she has a criminal record, she’s unemployable, and she’s never had a chance to grow up. She’s in survival mode. So I hope the people who do have a very extreme reaction at least try to understand her.”

The remarkable Bria Vinaite – a 24-year-old Lithuanian-born Brooklynite – had never acted professionally before landing the role of Halley. Baker, who uncovered Tangerine’s electrifying score on SoundCloud and who has previously cast using Vine, Skype and Instagram, discovered Vinaite on Instagram (where she was promoting her pot-themed clothing line).

“We thought we need someone as fresh as her,” says Baker. “Her character is going through so much and she’s turning to the underground economy. So if we have a celebrity on screen it’ll distract from that. No matter how good that person is. So I thought we’d roll the dice and bring her to Orlando for an audition. She had to put in some intensive work. But she got there. And we’re so proud of her.”

The Florida Project is on release from Friday

Kids in the picture: Three to See

Richard Donner directs a timeless tale of tearaway treasure hunters from a story by Steven Spielberg.