Golden Globes: Once Upon a Time in... Hollywood wins big

British comedian and actor Ricky Gervais returned to host the Golden Globe awards, cracking scathing jokes about Hollywood's elite that got both laughs and disapproving looks from the A-list audience. 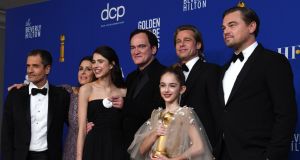 Quentin Tarantino’s Once Upon a Time in… Hollywood was the biggest winner in the film section at the 77th Golden Globes on Sunday night. The movie took three statuettes in an evening that saw love being spread in many directions. Tarantino’s film won best comedy or musical, best screenplay and, for Brad Pitt, best supporting actor.

Sam Mendes’s 1917, a propulsive drama set during the first World War, was the surprise winner of best drama film. The big loser was Martin Scorsese’s The Irishman. Seen as favourite for best drama, the Netflix production failed to convert any of its five nominations. Netflix, which also produced Marriage Story, winner of just a single Globe, will be licking its wounds. Out of 34 nominations across TV and film, the streamer won just two Globes.

Saoirse Ronan was nominated as best actress in a drama for Little Women, but, as the bookies had predicted, lost out to favourite Renée Zellweger for her turn as Judy Garland in Judy.

Selected by fewer than 100, largely obscure members of the Hollywood Foreign Press Association, the Globes have an erratic history of foreshadowing the Oscars and, given how thinly the love was spread, it’s hard to draw any firm conclusions about the awards that really matter. Joaquin Phoenix does, however, now look hard to beat in the race for best actor. The eccentric performer took the award on Sunday for his electric performance as Batman’s budding antagonist in Joker.

“I am such a pain in the ass,” he said in a speech that was rambling, but unquestionably sincere. Zellweger also looks to be on track to an Oscar for the sort of performance that awards ceremonies thrive upon. The Irishman is now reeling, but Scorsese is greatly loved by the Academy.

Taron Egerton snuck past Eddie Murphy and Leonardo DiCaprio to take best actor in a comedy or musical for the delightful Elton John biopic Rocketman. That singer also shared best original song with his lyricist Bernie Taupin. At the podium, John confirmed the surprising fact that the two songwriters, partners for half a century, had never received an award together. The actor and rapper Awkwafina took best actress in a comedy for the touching The Farewell. “If I fall upon hard times I can sell this,” she quipped.

Brad Pitt was all charm as he picked up best supporting actor for Tarantino’s film. He acknowledged that he was in distinguished company with fellow nominees Al Pacino, Anthony Hopkins, Joe Pesci and Tom Hanks. “When I was starting out these names . . . were like Gods to me,” he said. “I wanted to bring my mom, but any woman I stand next to they say I’m dating. It’d just be awkward.”

Many expected Jennifer Lopez, nominated for Hustlers, to win best supporting actress at a ceremony that loves stars, but she was pipped to that award by Laura Dern for Marriage Story.

An irresistible wave of emotion swept across the Beverly Hilton as Charlize Theron presented Tom Hanks with the Cecil B DeMille Award for outstanding contribution to entertainment. “You’re a dope if you don’t steal from everyone you’ve ever worked with,” he said in an emotional speech that covered his beliefs in the virtue of honest professionalism.  “Showing up on time is one of the greatest liberating gifts you can give yourself on a movie,” he continued.

Ellen DeGeneres, the comic and chat-show host, who broke boundaries by coming out as gay in the 1990s, was awarded the second-ever Carol Burnett award for contribution to television.

In the television section, the big winners, with two Globes each, were Chernobyl, HBO’s searing docudrama; Succession, a scurrilous family epic also produced by HBO; and Phoebe Waller-Bridge’s all-conquering comedy Fleabag. Waller-Bridge accepted the awards for best comedy and best actress in a comedy. Brandishing the latter award, she paid tribute to the Irish actor Andrew Scott, who plays the famous “hot priest”. He could, apparently, generate “chemistry with a pebble”. Scott was nominated for best supporting actor in a TV series, but lost to Stellan Skarsgård for Chernobyl. It was also a slowish night for Netflix in TV, but Olivia Colman did win best actress in a drama for her role as Queen Elizabeth in The Crown. It was like old times as HBO led the network chart with four wins.

Ricky Gervais’s return as host was a strange business. Since the comic’s last turn in 2016, the Weinstein scandal and surrounding campaigns have made Hollywood nervous of his exercises in creative offense. “You’ll be pleased to know this is the last time I’m hosting these awards,” he began to what could have been read as silent, tumbleweed-bouncing agreement. The monologue was probably the least daring of his five outings (though NBC did bleep a reference to Dame Judi Dench’s privates) with digs at Jeffrey Epstein, the campaign for diversity, Leonardo DiCaprio’s taste for younger women and the HFPA’s decrepitude. “The meal was all vegetables — as are the members of the Hollywood Foreign Press,” he joked. His best line was probably the suggestion that Felicity Huffman, jailed in the college admissions scandal, might have made his number plate. There remained, however, a sense that the audience was now frightened to be seen laughing at this material. This is no longer Gervais’s room.

There was some Irish interest with Dylan and Paris Brosnan, sons of Pierce Brosnan, acting as “Golden Globe ambassadors” for the evening — escorting winners on and off the stage. Their dad was among many who paid tribute to those affected by the Australian bushfires. It seemed as if nobody would dare allude to the US’s assassination of Qassem Suleimani, but Patricia Arquette, who won best supporting actress in TV series or film, did eventually gesture to the elephant in the room. “We won’t remember this night in the history books,” she said. “We will see a country on the brink of war, the USA — a president tweeting out a threat of 52 bombs”. She went down a lot better than Ricky Gervais.

Best motion picture, comedy or musical
Once Upon a Time in Hollywood

Best actress in a motion picture, comedy or musical
Awkwafina, The Farewell

Best supporting actor in a motion picture
Brad Pitt, Once Upon a Time in Hollywood

Best screenplay, motion picture
Quentin Tarantino, Once Upon a Time . . . in Hollywood

Adam Driver: ‘There’s a double standard for men and women’
6