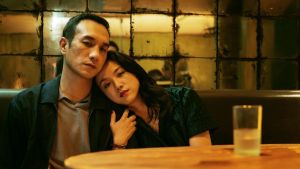 “Anytime I saw her I knew I was in a dream again,” says Hongwu Luo, the enigmatic hero of Bi Gan’s hypnotic, Delphian epic. The words are spoken over a strange, fragmented lightshow and are as much as we can say for certain watching this obtuse, spectacular drama.

There’s more a touch of mid-1990s Wong Kar-Wai dreaminess – so much green, so much neon – in the saturated colours and voiceover-driven Long Day’s Journey Into Night.

Hongwu Luo (Fallen City’s Jue Huang) is returning to rural Kaili in southeast China for the funeral of his father. At home, he recalls the death of a childhood friend, Wildcat, and Wan Qiwen (Lust, Caution’s Tang Wei), a great lost love who appears in several guises. She may be someone “who disappeared”. We’re told she shares her name with a movie star, Wan Qiwen, but she may also be called Kaizhen. Luo says that he “never knew her real name or age”.

As this hallucinogenic detective story unfolds against a series of peeling, leaking interiors, broken clocks, reflections and hidden artefacts, Wan Qiwen overlaps with another mysterious woman and with Luo’s mother. The Oedipal refractions work both ways. An out-of-focus stepmother, seeing Luo’s position in the room, notes that “before your father died he always drank alone in front of the broken clock.”

And suddenly it’s not that film at all, but a virtuoso imagined reboot of Lao’s past that begins in a murky cave, where Luo finds a mysterious younger version of Wildcat. A continuous 59-minute shot, thrillingly created by cinematographers Yao Hung-i, Dong Jinsong, David Chizallet and a drone camera in 3D, tracks and floats, weaves and soars.

Luo latches on to a zipline and slowly glides to a makeshift pool-hall where he finds another younger, variation of the woman. Dream logic kicks in. He promises to leave Kaizhen alone if she sings him a song. A strange stone staircase, shot with acknowledged allusions to Tarkovsky, leads to a stranger ramshackle fair.

It’s as arthouse as arthouse can be and yet, upon its release in China in 2018, this gumshoe trip broke box-office records, earning more money in pre-sales than any of the year’s biggest hits, including Avengers Infinity War. Those local audiences are on to something. Forget the big brand space opera: here’s the season’s pre-eminent work of event cinema.

Not to be confused with the 1956 Eugene O’Neill play.

Hilary Mantel: ‘Any nation that’s got warlords has got a Cromwell’
3

Build it and they will come: the story of the Irish language in a disused airport
6

‘There’s an Irish client none of us wants to handle ... from the North.’ Enter Gerry Adams
Real news has value SUBSCRIBE