The worst film of the 2010s was so reactionary, materialistic and lazy it selected itself 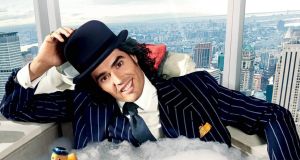 You had probably forgotten these ever existed. Sorry about that.

My main memory of the press screening was, as we staggered aghast into the street, an older colleague remarking: “Well, they got one thing right. [Name Redacted] was a total [Censored].” The adaptation of Neil McCormick’s likeable book on growing up next to Bono was clumsy, indifferently acted and wildly anachronistic. Most reviews used a U2 song in the headline. What about that one they did at Live Aid? Three-letter title? Rhymes with “sad”.

This was the decade when Johnny Depp’s luck finally ran out. Before Mordecai, we could convince ourselves that the actor was going through a bad patch, but this terminally unfunny romp was to Depp as the assassination of Archduke Franz Ferdinand was to the Balkan League: a jolting, possibly irreversible tipping point. Based on the amusing novels of Kyril Bonfiglioli, Mordecai offered Johnny one more chance to attempt the English accent he’s been failing to get right since 1987. Jolly good! Top hole! And so on.

Old pals get all saucy as they discuss 50 Shades of Grey in their book club. It’s a terrible idea for film, but fret not. The filmmakers abandon it almost immediately to visit related indignities on four of America’s best actors: Diane Keaton, Jane Fonda, Candice Bergen, Mary Steenburgen. Fonda delivers her dialogue as if tonguing pieces of rancid fish onto the back of her fork. She remains dignified. But she clearly doesn’t want this stuff sitting in her mouth for too long. Good for her.

And New Year’s Eve (2011) and Valentine’s Day (2010). We could easily fill up three spaces in this list with the late Garry Marshall’s hopeless portmanteau comedies concerning sentimental hooey on American holidays, but we like Garry too much and other films need kickings. The worst of the bunch is (perhaps inevitably) his lachrymose assault on Mother’s Day. Only mildly preferable to having cold scrambled eggs emptied over your cleavage when, on the special day, wee Sorcha makes you breakfast in bed. Jennifer Aniston and Julia Roberts are among the casualties.

Adapted from a story by Neil Gaiman, John Cameron Mitchell’s take on late 1970s Croydon features the sort of “punk rockers” you might meet in a contemporaneous British sitcom. Imagine an episode of Terry and June in which the suburban couple were inconvenienced by Dennis Degenerate and Vanessa Vomit. That sort of thing. To suggest that Nicole Kidman – playing an older mentor – manages a combination of Vivienne Westwood and the Acid Queen in Tommy would be to promise more fun than she actually delivers.

The sort of film that, like a kipper left in a warm place, stinks more and more as the weeks and months pass. Universal’s Dark Universe project – seeking to remake the studio’s classic horrors – managed the unprecedented feat of slipping into terminal decline before it had officially begun. The Mummy (actually the first in the series) was worse than Dracula Untold which was worse than The Wolfman. On reflection, you can replace “first” with “only” in the sentence above. A rare flop for Tom Cruise.

Released on December 23rd, this already legendary disaster managed to miss most critics’ lists of the worst films from 2016. If this were Twitter, I would now employ the man-rubs-chin emoji so beloved of conspiracy theorists. We are delighted to catch up with it now. A bafflingly starry cast – Knightley, Winslet, Mirren – come together for a gruesome, dishonest investigation of the grieving process. “It wasn’t that I felt love, it was that I felt like I had become love,” Ed Norton intones, while looking despairingly for the exit.

“Show us on the puppet where this film touched you.” “It touched me here and here and [sobs] here – on my special place.” “Let the record show that the witness is pointing towards his soul. HIS SOUL!” We should acknowledge that the makers of this pathetic, puppet-heavy variation on Who Framed Roger Rabbit were deliberately leaning into bad taste. That does nothing to make the squalor of the thing any less troubling. Sesame Street in hell.

You’d forgotten this ever existed, hadn’t you? You’d probably erased that entire depressing period when they tried to make Russell Brand into a movie star. Jason Winer’s remake of a 1980s hit cast Brand as drunk Dudley Moore, Helen Mirren as butler John Gielgud and Greta Gerwig as girlfriend Liza Minnelli. You what? None of the ideas were good, but structuring a whole feature around a man with less acting ability than a dead jellyfish was the worst of the lot. You can now forget it again.

Welcome back, ladies. A decade ago, we found a space for the first episode in our worst films of the 2000s. Given how much more appalling the sequel turned out - reactionary, materialistic, racist, lazy, puerile - it would be an outrage if we failed to place it at the top (bottom?) of the current chart. This was the one in which our heroes flew to Abu Dhabi (apparently Dubai wouldn’t have them) to vomit up money and patronise the locals like the worst sorts of vulgar imperialist. Noting how a series that celebrated the female experience had decayed into a betrayal of feminist principles, we wondered, just six months into 2010, if we would see a worse film in the coming decade. The good news is that we probably didn’t. Even Sarah Jessica Parker eventually owned up to its wretchedness. “I can see where we fell short on that movie and I’m perfectly happy to say that publicly,” she said in 2017. “I will say, I also understand how much friggin’ money it made.”

Duffy says she was ‘raped, drugged and held captive’
8