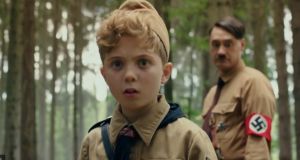 JOJO RABBIT ★★★★☆
Directed by Taika Waititi. Starring Roman Griffin Davis, Thomasin Harcourt McKenzie, Taika Waititi, Scarlett Johansson, Sam Rockwell, Rebel Wilson, Stephen Merchant, Alfie Allen. 12A cert, gen release, 108 min
Set in Germany during the closing days of the second World War, Waititi’s tricky comedy hangs around a deluded young man named Jojo Betzler (Davis). Like many others of his generation, Jojo has swallowed the Nazi ideology whole – so much so that he has taken Hitler as an imaginary friend. Not everything works here (mawkishness is an occasional danger) but we are never in any doubt that Waititi’s sympathies are in the right place. Johansson is strong as the boy’s mum. DC

The pitch for this thoughtful French drama might make one think, not unreasonably, of such 1980s comedies as Three Men and a Little Lady, in which hapless men struggle to cope with new charges. David (Lacoste) is just such a specimen: an aimless twenty-something Parisian whose life turns upside down when he suddenly becomes the primary caregiver to his young niece (newcomer Multrier). So far, so Instant Family. But the film evolves into a fictionalised and pleasingly unsentimental variation of a traumatic 2015 news story. TB

At its most beautiful and serene, Aquarela is the Koyaanisqatsi of water documentaries, an epic tale on the majesty of H2-Whoa (sorry). But as the metallic introductory music (by Finnish violinist Eicca Toppinen) indicates, this is not a tranquil nature documentary, but a warzone in which water is the primary antagonist. The film-makers often improvised locations in order to simulate the water’s POV. That makes for nerve-wrecking viewing; at least the Free Solo crew knew what to expect from El Capitan. Shot in 96 frames-per-second, this is a stunning, thrilling chronicle of nature at its angriest. TB

“Anytime I saw her I knew I was in a dream again,” says the enigmatic hero of Bi Gan’s hypnotic, Delphian epic. The words are spoken over a fragmented lightshow and are as much as we can say for certain about this obtuse, spectacular drama. There’s more than a touch of mid-’90s Wong Kar-Wai dreaminess – so much green, so much neon – in the saturated colours and voiceover-driven story. Hongwu Luo is returning to rural Kaili for the funeral of his father. At home, he recalls the death of a childhood friend, Wildcat, and Wan Qiwen, a great lost love. She may be someone “who disappeared”. We’re told she shares her name with a movie star, but she may also be called Kaizhen. And suddenly it’s not that film at all, but a virtuoso imagined reboot of Luo’s past that unfolds as a continuous 59-minute shot. Forget the big brand space opera: here’s the season’s pre-eminent work of event cinema. Full review TB

Adam Driver: ‘There’s a double standard for men and women’
5