Jojo Rabbit: between daring and bad taste in Nazi Germany

Review: While the film argues against hate, it does little to educate about the specific enormities of Nazi Germany 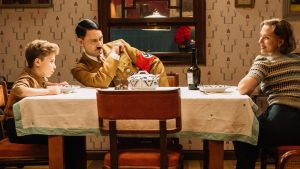 Philosophers still argue over what Theodor Adorno meant by “to write poetry after Auschwitz is barbaric”. We can, however, safely wager that those who took him literally would not care for an “an anti-hate satire” that presents Adolf Hitler as more bumbling eejit than genocidal demagogue. Such is the strategy in Taika Waititi’s already controversial fourth feature.

Among this season’s prestige releases, only Todd Phillips’s Joker has more sharply divided critics. Winner of the People’s Choice award at the Toronto International Film Festival, Jojo Rabbit subsequently suffered the ultimate indignity of being repeatedly compared to Roberto Benigni’s Life is Beautiful. Nobody deserves that.

The Kiwi polymath (who, it is worth noting, sometimes writes under “Cohen”, his mother’s surname) can have been in no doubt that he was paddling in dangerous waters. Set in Germany during the closing days of the second World War, the picture hangs around a deluded young man named Jojo Betzler (Roman Griffin Davis). Like many others of his generation, he has swallowed the Nazi ideology whole – so much so that he has taken Hitler as an imaginary friend.

In a performance that owes more to Freddie Starr than Bruno Ganz, Waititi plays this version of the Führer as a spoilt brat who, like many pals to younger children, pulls on a sulk when his advice is ignored. Among the film’s lesser gambles is the decision to have Jojo’s liberal mum (Scarlett Johansson) treat her son’s obsession as the sort of silly aberration all children go through. You know how it is. They’ll get over it in the end.

Jojo’s views are challenged when he encounters an intruder hidden in the walls of the house. Elsa (Thomasin McKenzie), a Jewish girl, apparently secreted by Mrs Betzler, turns out to display none of the comically gruesome traits laid out in the Nazi propaganda. No horns. No telepathic powers. Our hero softens.

The myriad objections form an overlapping Venn diagram. Some argue such comic treatment of stories from the Holocaust are never acceptable. Others suggest Jojo Rabbit is just not funny enough to make the risk worthwhile. Nothing is more subjective than comedy, but the often broad, sometimes sly satire worked throughout for this writer. The picture begins with montages of Nazi life to the strains I Want to Hold Your Hand in German and continues in that disrespectful vein throughout.

Sam Rockwell and Rebel Wilson are terrific as minor officials – the former weary, the latter more enthusiastic – tasked with flogging an ideology that is as absurd as it is evil. Stephen Merchant channels Herr Flick as a bumbling Gestapo officer. It takes nothing from the horror to point out that it springs from idiocy. The manic visual and audial tone, suggestive of Wes Anderson with a screw loose, reflects a child’s perspective without implying any trivialisation of the wider history.

If there is any danger to the approach – a differently pitched issue with contemporaneous Hitler comedies such as Chaplin’s The Great Dictator or Lubitsch’s To Be or Not to Be – it is that, in the 21st century, we can, perhaps, not take it as read that all audiences will come to the picture with inbuilt knowledge of and abhorrence for the regime. The film argues against hate. It does little to educate about the specific enormities of Nazi Germany. But it’s passion for tolerance remains sincere.

A test of audience tolerance for the Waititi doctrine comes about two thirds of the way through the action. (We won’t spoil it even a little, but you’ll know it when you see it.) Even those taken in will be aware that the moment is teetering on the edge of mawkishness. Jojo Rabbit works such tensions throughout: between laughter and groans, between emotion and sentimentality, between daring and bad taste. Such gambles are worth taking even if you believe the gambler is headed for the breadline.

Terry Jones, Monty Python star, dies at the age of 77
9