JoJo Rabbit: Hitler, the Jews and the boundaries of comedy 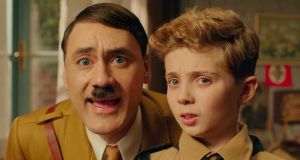 JoJo has an imaginary friend - a dopey, goofy rubber-faced Hitler, played by Waititi himself

Taika Waititi is the director of the hugely popular Hunt for The Wilderpeople and Boy, both of which showcase his own heartfelt whimsical comedy, and also of the blockbuster Thor: Ragnarok. He also co-directed (with Jemaine Clement from Flight of The Concords) the hilarious vampire mockumentary What We Do In The Shadows.

His new new film, JoJo Rabbit, is a very funny comedy set in Germany towards the end of the second World War. The film follows 10-year-old JoJo, an enthusiastic member of the Hitler Youth, whose worldview is challenged when he realises his mother is hiding Elsa Korr, a young Jewish girl, in their house.

JoJo also has an imaginary friend – a dopey, goofy rubber-faced Hitler, played by Waititi himself. (As he has said in interviews – who better to play Hitler than a Polynesian Jew?).

The film has been much lauded yet also criticised in some quarters for the temerity of using comedy to engage with such material. Yet, it is part of a long tradition of filmmakers using comedy to tackle difficult subjects. Armando Iannucci portrayed a murderous tyrant in The Death of Stalin, yet managed to generate a hilarious comedy – intelligent with an almost slapstick physicality – that bore witness to the horror of that time.

Mel Brook’s 1967 film The Producers caused controversy because it revolved around the making of an irreverent musical – Springtime for Hitler – but is now considered a classic comedy. It is gloriously silly and denigrates Nazis on this silly, simple level.

A pioneer in using comedy to broach difficult subjects is film director Todd Solondz who managed to make comedy from the darkest materials of life while staying true to the core of reality. The paedophile-son scene in his film Happiness is difficult to watch yet truly moving and very funny.

Monty Python pushed the envelope on humour, culminating in their The Life of Brian, banned in Ireland for many years. It took aim at Christianity and Christ, nailing both targets with hilarious results. Former Python Terry Gilliam made the brilliant Brazil, a dystopian comedy in which the horror developed directly from the tone for a truer version of 1984 than the dour dystopia of the actual film adaptation of Orwell’s book.

Waititi talks of having been influenced by Chaplin’s The Great Dictator – whose Adenoid Hynkel lampoons Hitler. The film ends with a heartfelt speech calling for love to triumph over fascism.

Waititi has also described playing Hitler, including the moments when he wasn’t performing, as a funny imaginary friend and felt very flat because he “was” Hitler. Equally, watching JoJo Rabbit there were moments where my laughter was complicated by the fact that I suddenly thought: that’s supposed to be Hitler, and all that that meant seeped out through the cracks of the comedy. “Silly Hitler” seemed sometimes problematic – sometimes not.

One criticism of JoJo Rabbit is that the humour is too whimsical and gentle and should have been more savage. Yet, this style of comedy is appropriate for a world seen through the innocent eyes of a child in a comedy with goodies and baddies and people in the right and people who are wrong and the cool position and the stupid position. Even on this rudimentary level we know whose side we’re on.

There is a Wes Anderson influence in terms of framing, mise en scene and tone. But Anderson’s characters are often self-contained and impermeable to the outside world, although seemingly bearing its slings and arrows; there is a deadpan ironic distance, with characters acting as though in an elegant cartoon.

Waititi is more open to emotion. Some of the film’s most poignant and devastating moments are also its best. At the moral heart of JoJo Rabbit is the relationship between the boy and his mother. There is a devastating moment that is shocking because the journey up until then has been largely comic. Lulled by the comedy, I was suddenly crying.

Through comedy, Waititi shows how people get caught up in these things: early in the film, at a book burning (“Let’s burn some books . . . Yeah!” shout the Hitler Youth), we see JoJo’s unsure look as people enthusiastically fling books on a pyre. He knows this is not right but his feelings disappear as he responds to the general enthusiasm and happiness of his fellow Nazis in burning books.

He responds to the sense of belonging, of being part of a group, a family, of a sense of fun, almost a game, that his 10 year old self can revel in; after all, everybody else is doing it.

As his mother later angrily says: “You’re not a Nazi - you’re a 10-year-old boy who likes dressing up in a funny uniform and wants to be part of a club.” (Oh, how many adult white male men members of how many institutions could this describe?!)

A message for all times

JoJo Rabbit is a sophisticated film that deploys its laughter expertly. Comedy on screen has become ever more sophisticated – whether it’s Sacha Baron Cohen’s Borat, or TV’s The Sarah Silverman Program, Fleabag, Catastrophe or Curb Your Enthusiasm (see the audacious Palestinian restaurant episode – where Larry David stamps along many knife edges).

Roberto Benigni, director of Life is Beautiful, has said that “the point where comedy and tragedy meet, when you laugh and cry at the same time, is almost God-like” while the writer James Woods, in his book The Irresponsible Self, quotes Freud’s interest in “broken humour”, defined as the humour “that smiles through tears”.

For me, the Holocaust is beyond joking – it is the void of human experience and can only be addressed by a documentary like Claude Lanzmann’s Shoah or a poem like Paul Celan’s Death Fugue. But humour existed even on the darkest edges of human existence, on the border of annihilation, as can be seen from this shocking joke from Treblinka, as quoted in Jeremy Dauber’s book Jewish Comedy (A Serious History): “Cheer up – we’ll meet again some day in a better world. In a shop window, as soap.”

In the same book Dauber points out comedy can be an actual form of resistance: “Hitler set up joke courts to punish and silence mocking opponents.”

Waititi speaks of the need to tell this history in case it is forgotten. In order to do this we need to retell again and again, in many different ways, to reach all audiences. My children, Alex (14) and Rosa (16), wanted to see JoJo Rabbit because they love Taika’s work. (I don’t think, at their age, they would be as interested in watching Shoah or reading Celan). After the screening I asked what they thought of it. Alex thought it was “very funny and sad,” while Rosa said it was “extremely funny ... a unique mix of funny and sad and a unique take on that period of time.”

JoJo Rabbit is a comedy of resistance. It’s a rally call to love and to reject hatred and scapegoating of the other - a message for our time. A message for all times.

Brian Cox: ‘Princess Margaret started to run her fingers down the inside of my shirt’
9

‘In five seconds my life changed. I was worse than the worst jazz snob’
Real news has value SUBSCRIBE