Sex between men illegal in Singapore, punishable by prison but law does not apply to women 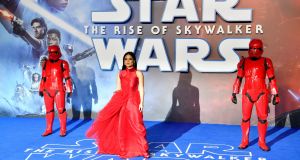 Disney has cut a lesbian kiss from the latest Star Wars movie - one of the top Christmas films - Singapore’s media regulator said on Tuesday, so that more children can watch it.

The two minor female characters embrace but do not kiss in the version of The Rise of Skywalker shown in Singapore, local media said, as the ninth and final film in the celebrated science-fiction series rakes in millions from loyal fans.

“The applicant has omitted a brief scene which under the Film Classification Guidelines would require a higher rating,” a spokeswoman from Singapore’s Infocomm Media Development Authority told the Thomson Reuters Foundation.

Disney, which owns the Star Wars production company Lucasfilm, did not respond to a request for comment on its decision to cut the scene from the last instalment of the second highest-grossing movie franchise of all time.

It concludes a story that began in 1977, when filmmaker George Lucas introduced a young hero named Luke Skywalker and delighted audiences with a galaxy of robots, furry warriors known as Wookiees and a host of other eclectic characters.

Sex between men is illegal in Singapore and punishable with up to two years in prison, though the British colonial-era law is rarely enforced. The law does not apply to sex between women.

The film is rated PG-13 in Singapore without the kiss scene, meaning parental guidance is advised for children below 13. Higher ratings mean it could be restricted only to viewers aged 16, 18 or 21 and above.

In 2016, the Singapore organisers of the musical Les Miserables removed a scene in which two male actors kiss after complaints from the public.

Disney declined to respond to a question about censorship in other markets, including the Middle East, amid media reports that lesbian kiss has also been deleted from screenings of The Rise of Skywalker in Dubai in the United Arab Emirates.–Reuters

Don’t Be Evil: The Case Against Big Tech: Important book on corporate giants
4