There probably are people who will enjoy hearing McGregor refer to three of his cars as ‘a Merc, a BM and a Range’

The official trailer for "Notorious", a documentary that looks at the life and career of Irish MMA star Conor McGregor has been released. Video: Universal Pictures 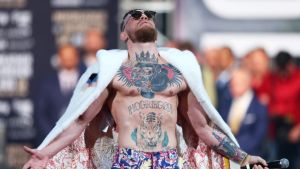 Let’s pretend we don’t know what this alleged documentary on Conor McGregor is for. Let’s pretend there’s some doubt that it is aimed solely at those who are already on board with his bling and his braggadocio. Let’s ask what we learn about the man.

Well, Gavin Fitzgerald’s competently made film does feature a few scraps from the fighter’s early life. After a brief prologue in McGregor’s Vegas palace – a fantasia in the late Saddam Hussein style – we travel back to a scruffy Dublin gym. These were the days when he and his fellow brawlers could barely afford a mouth-guard. “We don’t have the Sports Council, ” he quips.

Even the firmest sceptics accept that McGregor has made an astonishing journey. Transforming a sport that was once on the outskirts of respectability, he took himself from Crumlin to Vegas and built an empire along the way. Dee Devlin, his partner, walked beside him and helped ensure the bills were paid. That’s a story.

Unfortunately, we barely touch upon that ascent after the opening 10 minutes. Fitzgerald has been granted liberal access to the current McGregor and, if vicarious consumption is what you’re after, then you will be in diamond-encrusted heaven. McGregor strides from house to driveway in beautifully tailored three-piece suits (aren’t those awfully hot in Nevada?). An excruciating bout of mutual backslapping with Arnold Schwarzenegger really does end with the former governor saying: “I’ll be back”. There probably are people who will enjoy hearing McGregor refer to three of his cars as “a Merc, a BM and a Range”. Others will roll their eyes.

Where are the revelations? Fly-on-the-wall documentaries on such bombastic figures are expected to offer some contrast between the exterior bluster and the more-nuanced interior life. At weigh-ins and press conferences, Conor McGregor (when not calling people f**gots) is known for telling us how fantastic he is at enormous length.

If Notorious is to be believed, he also spends downtime telling staff, members of his family, passing officials and visiting film-makers how fantastic he is. Everyone gets to hear how fantastic he is. The film posits no great distinction between the private man and the public persona. When visitors arrive in McGregor Towers they are asked to celebrate its intergalactic magnificence. Devlin, an apparently admirable person who must have tales, is shown only in cheerleading roles. Even the tiniest insight would be welcome.

The closest the film comes to prising a chink in the façade comes when McGregor loses an important title fight to Nate Diaz. We get a hint of vulnerability as he hangs his head in the dressing room. But Notorious is soon back to its hagiographic rhythms.

The picture is equally uninterested in converting those puzzled (or revolted) by the aesthetics of the Ultimate Fighting Championship (UFC). By the time McGregor reaches the UFC cage, the canvas is stained with the blood from less prestigious fighters. If the unconvinced are to be won over then some explanation of the nuances would be useful. The sport is not just about strength and aggression. You will, however, learn little about why one sickening blow causes more damage than the next.

There is no point pretending. Conor McGregor: Notorious (executive produced by one C McGregor) is just another weapon in the fighter’s promotional arsenal. It belongs with the T-shirts, posters and mouse mats. No allowances are made for dissenters because dissenters are not invited. Slickly edited, noisily scored, it will do perfectly well for those who already know they’re going to like it. Anybody else, stumbling in by accident, may be knocked sideways by the promiscuous egotism.

“I’d like to fight myself,” McGregor says at one point. Not just that, I’m betting.

Shots in the Dark: A portrait of Britain as a struggling team
8