Another mainstream monster is back in business, in a serviceable midtable offering 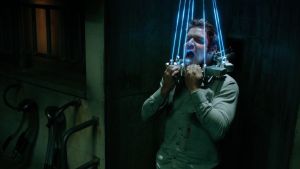 Remember Saw: The Final Chapter? Chance would be a fine thing.

Seven years on from that allegedly terminal horror and Jigsaw (aka John Kramer), the moralising murderer with the Rube Goldberg torture contraptions has returned to hack up the box-office.

To be fair, Halloween hasn’t really been the same without Tobin Bell’s worse-than-Candy-Crush gaming invitations, Billy the Puppet, Charlie Clouser’s excellent score, and the nerve-racking spectacle of chained wicked-doers getting dragging towards a wall of rotating blades.

Working from a screenplay by Josh Stolberg and Peter Goldfinger, Daybreakers and Predestination directors Michael and Peter Spierig have an elegant (if blindingly obvious) solution to the not insignificant problem of franchise fans having witnessed the main character’s autopsy as long ago as Saw IV.

There are a few moments of self-reflexivity, notable when one laser-collared dirty cop (Callum Keith Rennie) marvels at his captor’s continuing existence: “How are you still alive?”

A better question might be: “Why are you still alive?” True, there’s a nostalgic glow in guessing which of the characters on screen are destined for a gooey end, and which one is likely to be in cahoots with the killer.

Might it be forensic pathologist and Jigsaw-obsessive Ellie (Hannah Emily Anderson)? Or her PTSD war veteran partner, Logan (Matt Passmore)?

Having slashed and diced his way through corrupt urban planners, crooked insurers, evidence-planters, callous lawyers and inept medics, John Kramer now rounds up a child killer and the seller of a dodgy motorbike to flounder their way through his fiendish devices.

The resulting Grand Guignol will please fans, although the gore is never as groundbreaking as the drowning in pig entrails and reserve bear traps of old.