The Killing of a Sacred Deer: Colin Farrell and Barry Keoghan in an extraordinary film

Irish-financed film The Killing of a Sacred Deer produced by Dublin-based Element Pictures, has been named the joint winner of the award for Best Screenplay at the Cannes Film Festival. 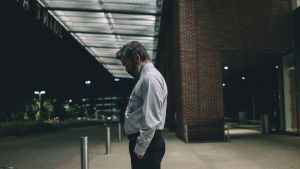 Colin Farrell, having previously channelled a cannier Fr Dougal on Valium for the purposes of The Lobster, finds unexpected new textures in flat to explore

Film Title: The Killing of a Sacred Deer

Steven (Colin Farrell), an open-heart surgeon, discusses watches with his anaesthesiologist friend. Steven buys the watch recommended by his colleague and presents it to Martin (Barry Keoghan), a teenager he meets up with at a diner.

He later invites Martin home to meet his family, including his ophthalmologist wife, Anna (Nicole Kidman), 14-year-old daughter Kim (Raffey Cassidy) and long-haired son Bob (Sunny Suljic). Martin soon insinuates himself into the household, just as Bob succumbs to a bizarre mystery illness. Martin issues an equally bizarre ultimatum: Bob and the others will only survive if Steven makes a terrible sacrifice.

Do you ever pine for the early 1990s, when the golden age of bunny-boiler movies yielded such guilty pleasures as Single White Female and The Hand that Rocks the Cradle? And have you ever wondered what a revival of that subgenre might look like, if, say, shepherded in by the deliciously deviant minds behind Dogtooth and The Lobster? Well then, please be upstanding for The Killing of a Sacred Deer, a stalker picture that delights in deflating its hysterical generic underpinnings.

Although Sacred Deer shares some DNA with the Pinteresque invasion flicks of New French Extremism, notably Sitcom and La Ceremonie, most of its weaselly charms are derived from its perverse adherence to the rules set by its Hollywood antecedents. Even DOP Thimios Bakatakis’s establishing shots look parodic. There’s no over-the-sink sex scene with Glenn Close, but there is, nonetheless, something disquieting and inappropriate about Steven’s friendship with Martin from the get-go. The viewer, accordingly, is forced to think wronged Anne Archer from Fatal Attraction: How long has this been going on, anyway?

As ever, writer-director Yorgos Lanthimos and regular co-writer Efthimis Filippou are trolling, well, all of us, with his uncomfortably banal approximations of human behaviour. The smalltalk is excruciating. Nicole’s “general anaesthetic” is, erm, something.

It’s not quite as discombobulating as the director’s earlier, freakier ones. Deer’s world is neither as deliriously expansive as that of The Lobster, nor as incestuously claustrophobic as the familial discontents of Dogtooth.

Farrell, having previously channelled a cannier Fr Dougal on Valium for the purposes of The Lobster, finds unexpected new textures in flat to explore: think Buster Keaton doing Beckett. Kidman nails a sign to the wall. But it’s Barry Keoghan who steals the show, thanks to a mouth-breathing, awkwardly gaited physicality and a breathless and-then-and-then playground game tone he uses to deliver his malevolent plan.

Cancel awards season: Barry Keoghan has won all the filums for 2017.