The Florida Project review: The kids are more than alright

A vibrant, bold and bright portrayal of American childhood which just has to be seen 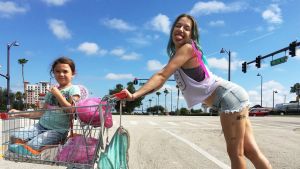 The Florida Project: remains stubbornly humanistic and openhearted throughout

Nothing more dooms a film than hyperbolic reviews. So I will choose my words with caution. Sean Baker’s follow-up to the excellent, innovative Tangerine is among the best films ever made about childhood. It bears comparison with Truffaut’s The 400 Blows, Bergman’s Fanny and Alexander and Linklater’s Boyhood. The picture deals with parental irresponsibility so extreme it borders on criminal neglect, but The Florida Project remains stubbornly humanistic and openhearted throughout. Making creative use of an ingeniously chosen location, it reveals an America that we’ve never seen before. One familiar face has never been better. The new discoveries burn up the screen. Is that sufficiently couched?

Baker has moved from the transgender outsiders of West Hollywood that so energised Tangerine to a weird crumbling Neverland on the outskirts of Disney World in Orlando. Painted in brash fuchsias and eye-watering maroons, the rundown motels (boasting vainglorious names such as the Magic Castle and the Futureland Inn) house vagrants, meaner tourists and families with nowhere else to go. Our heroes are Halley (Bria Vinaite), a recently unemployed stripper, and her irrepressible, six-year-old daughter Moonee (Brooklynn Prince). Halley is, in many ways, an appalling pain: loud, unruly, disorganised, uninterested in sane parenting. But she is endlessly hilarious and there is never any doubt that she loves her daughter. After all, they’re both kids.

The closest thing to an adult in this pistachio mayhem is Bobby (Willem Dafoe), the harried manager of the Magic Castle. He acts as buffer between the raucous tenants and his understandably concerned employers. He negotiates with social services. In one powerful scene, he escorts a paedophile away from the motel with a diplomatic ingenuity that keeps the children in happy ignorance.

Noting that Dafoe, perennial onscreen maniac, has taken the role, we initially worry for the kids’ well-being. But this proves to be a splendid piece of casting. Those famous facial furrows add gravity to a character who gradually emerges as the film’s walking, sighing exemplar of human decency. He is no saint. He just tries to make the best of everyday injustice. (Sorry to lower the tone, but Dafoe is currently most pundits’ favourite to take the Oscar for best supporting actor.)

The Florida Project is a film about the victims of capitalism, but, for most of its duration, it is unexpectedly vibrant and upbeat. Moonee and her chums enjoy the same sort of freedom that we see in idyllic portraits of rural life such as Cider with Rosie or urban strife such as Hope and Glory. We first meet them enjoying a gobbing competition on another guest’s car. They contrive hilariously transparent cons to extract free ice cream from amused tourists.

All this is filmed with a camera that moves with the same joyous bounce as its subjects. We see the world as Moonee sees it: bold, bright, full of short-term possibilities. The hitherto inexperienced Brooklynn Prince belts out her lines with an exuberance that never allows cuteness to overcome rough charm. She’s a star.

The tension emerges from our awareness that economic realities or official disapproval are certain to halt the anarchic fun eventually. Halley may swagger like the children, but she knows which wolves are circling which enclosures. She is the most engaging menace you could hope to meet on a cinema screen. If affection were all that was required, Halley would deserve every award for “Mom of the Year”. In the real world, her inability to engage with commonplace responsibilities invites disaster.

Yet, for all the looming adversity, Baker still manages to end the film on a magic, dreamy high. The magnificent final shots (possibly fantastical) offering a convincing argument for living in The Now whenever you are able.